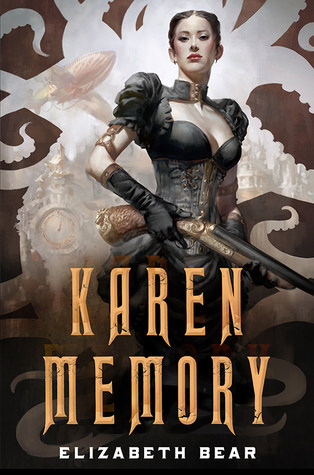 Set in the late 19th century—when the city we now call Seattle Underground was the whole town (and still on the surface), when airships plied the trade routes, would-be gold miners were heading to the gold fields of Alaska, and steam-powered mechanicals stalked the waterfront, Karen is a young woman on her own, is making the best of her orphaned state by working in Madame Damnable's high-quality bordello. Through Karen's eyes we get to know the other girls in the house—a resourceful group—and the poor and the powerful of the town. Trouble erupts one night when a badly injured girl arrives at their door, begging sanctuary, followed by the man who holds her indenture, and who has a machine that can take over anyone's mind and control their actions. And as if that wasn't bad enough, the next night brings a body dumped in their rubbish heap—a streetwalker who has been brutally murdered.

Bear brings alive this Jack-the-Ripper yarn of the old west with a light touch in Karen's own memorable voice, and a mesmerizing evocation of classic steam-powered science.

My thoughts:
Sometimes I just dig my heels in. Dunno why, but I do. Maybe cos it was a book that I really wanted to enjoy. So I read half of it and was bored. I kept thinking that I must suffer through. But then I started to skim cos I was all hell with this!

Karen works at a brothel.
Someone is killing ladies of the night.
In comes the lone ranger
It was a steampunk book
Not a lot of steampunk in it.
I did not care for anyone or anything.

I was bored.
I do believe it would work better on audio though...hmmm
Written By Carole Rae at 6:00 PM