This month Blodeuedd and I read and discussed "Juliet in August". I am in blue and Blodeuedd is in black. 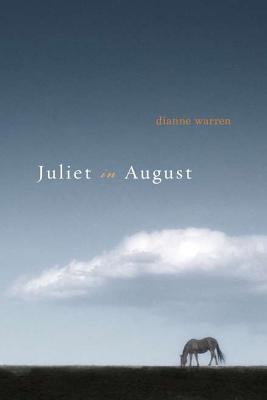 Author: Dianne Warren
Title: Juliet in August
Genre: Fiction
Pages: 336
First Published: 2010
Where I Got It: My Shelf (Dollar Tree)

Juliet, Saskatchewan, is a blink-and-you-miss-it kind of town dusty oasis on the edge of the Little Snake sand hills. It’s easy to believe that nothing of consequence takes place there. But the hills vibrate with life, and the town’s heart beats in the rich and overlapping stories of its people: the rancher afraid to accept responsibility for the land his adoptive parents left him; the bank manager grappling with a sudden understanding of his own inadequacy; a shy couple, well beyond middle age, struggling with the recognition of their feelings for each other. And somewhere, lost in the sand, a camel named Antoinette.


Damn girl, this was pretty boring.

I knooooooooooow! Gah. It sounded SO good.

It did have promise. I did feel her writing was good, but aghhhh, the story itself was sooooo dull.

Really? I feel like her writing was just meh. The story was okay. I feel like she should’ve stuck with one or two families/people.

I felt like I could roll with her writing, there was something there. And yes one of 2 families would have been excellent. And for something to actually HAPPEN in that dang book.

It did feel like there was ALL this build-up like Antoinette was going to save a small child or something. There was all this tense and build-up and then it just….ended.

Yes! Why even mention Antoinette, when nothing happened? It was just so boring. That town sounded boring. The people sounded boring. Take a story and make something of it. Like Lee’s real parents. Who? I wanted to know. Now I got nothing. And make him find love or something too. And that woman who bought the horse...what? Make a story from it.

Lol. That is a good way of putting it. I’d say waiting at the Bank. Nothing happens. They are late as always. Your phone is dying. And the people around are all grandmas who look sleepy.

Yess. The phone is dying and you just want it to be over and go home. LOL

And you are hungry! And too cold, or too warm. Nothing is quite right. Might throw in a headache there too.

So much misery but you have to do it. I had to finish the book because I kept thinking that SOMETHING has to happen. I also wanted to see if the camel came back. But then it was just over.

Or at least find the camel’s corpse! Like the Lee story, I thought something would happen, but he just rode that horse.

Yesss! I did like Lee a lot, but he was boring too. He was an interesting boring though...if that makes sense

He was pretty boring, but he had the story with potential. But like with everything, nothing happened.

Nope. I wanted Lee to be a hero or something. Save a little kid or save Antoinette...or something. But again...nothing.

And that sums up the book. You keep waiting for something to happen and it never does.

Oo! I was intrigued by Hank and his wife (*blanking on name*). He had cheated on her in their youth and now she thinks he is cheating again. I wanted to find out more about them. See...I really think she should’ve stuck with a couple of people to follow. There was a lot of stuff happening, but nothing happening at the same time. I felt like I was in the Twilight Zone.

You know what I do not even remember them. Was that the couple with too many kids? They all melt together in my head now.

No - he was the rodeo guy and now they are old and he doesn’t do it anymore, but she suspects he is cheating.

Lol, still nothing. Wait the couple with the preggo daughter?

I think their daughter is preggo. I can’t remember. LOL! We are bad people. xD

Because we do not care….

I do not have a lot more to say. I skimmed towards the end so the book would END.

Neither do I. All I can say is that I am sorry! LOL! And do not read this book unless you want to sleep. I nodded off 4 times. It is a small book and it took 5 days for me to read it. Too long. Anything else for you?

Lol, nodded off. I struggle all week. The first day went fine then it went slooow and slooower. So yes do not read this book.

Unless you need a nap. ;) LOL Well….your book is next! Hopefully it will be a good one!

Nope, it is that book from NG. That is your book next then ;)

Oh noes! I am excited to read the next one though! It should be good….*fingers crossed*
The end?

Lovely - a boring book and such a vivacious discussion!