Blodeuedd's Monday Review: The Bear and the Nightingale by Katherine Arden 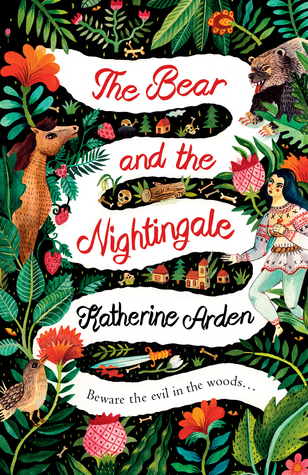 At the edge of the Russian wilderness, winter lasts most of the year and the snowdrifts grow taller than houses. But Vasilisa doesn’t mind—she spends the winter nights huddled around the embers of a fire with her beloved siblings, listening to her nurse’s fairy tales. Above all, she loves the chilling story of Frost, the blue-eyed winter demon, who appears in the frigid night to claim unwary souls. Wise Russians fear him, her nurse says, and honor the spirits of house and yard and forest that protect their homes from evil.

After Vasilisa’s mother dies, her father goes to Moscow and brings home a new wife. Fiercely devout, city-bred, Vasilisa’s new stepmother forbids her family from honoring the household spirits. The family acquiesces, but Vasilisa is frightened, sensing that more hinges upon their rituals than anyone knows.

And indeed, crops begin to fail, evil creatures of the forest creep nearer, and misfortune stalks the village. All the while, Vasilisa’s stepmother grows ever harsher in her determination to groom her rebellious stepdaughter for either marriage or confinement in a convent.

As danger circles, Vasilisa must defy even the people she loves and call on dangerous gifts she has long concealed—this, in order to protect her family from a threat that seems to have stepped from her nurse’s most frightening tales.

My thoughts
I enjoyed this one and yes I was surprised because hype books, aye, they often fail me. But then it is a sort of fairy tale and I love them.

Vasilisa's grandmother was a witch, or so people said. And her own mother dies giving birth to he last child. The daughter she wanted to be like her own mother. A wild girl who runs in the woods and sees things in the shadows. And I liked all those things the in shadows, all known to me, except for that the Russians have a woman drowning people and we have a man. I always liked the stories of those taking care of houses and stables, and that you should feed them to make them happy. In the story they give bread, here it would be porridge. I have always loved folklore and it is so beautifully woven in and it makes you miss those times. But then came men with crosses and called them demons and they disappeared. And it made me sad.

Right so the mythology was obviously interesting.

I liked the story of her growing up and being destined for something. I liked her spirit.

And then came that dang priest, arghhhh, and her evil stepmum, arghhhhh. Yes a book needs baddies but everyone was so happy before those two!

Conclusion:
'I enjoyed this tale and it does end well. But there will be more and I am happy for that. She needs more adventures, and at the same time I am happy there was no cliffie.

Cover
Not a fan, it looks so childish and this tale fits everyone
Written By Carole Rae at 8:21 PM

Email ThisBlogThis!Share to TwitterShare to FacebookShare to Pinterest
Labels: B's Mondays, Blodeuedd, Books and Reviews, Katherine Arden, The Bear and the Nightingale

I should have picked it for a joint one, sigh

It would've been a good one B!

It's the first time I hear about this one