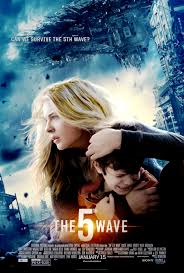 SUMMARY:
Four waves of increasingly deadly alien attacks have left most of Earth decimated. Cassie is on the run, desperately trying to save her younger brother.

Read the book a little while ago for book club. I’ve been looking forward to the movie. I liked the book, but I had a feeling the movie might be even a little better due to the trailers. It was in some aspects…but not in others. So in the end they are nearly even.

I liked the cast they picked except for the main girl. Normally I really like the actress, but I feel like she didn’t try. Her acting seemed forced and she said was “shit” at least once or twice in every scene. It got really annoying QUICK. Maybe this should be blamed on the screen writing as well. But I wanted to flat out punch her. All her faces and expressions were the same. She has been so good in past movies. Sighs. Did she take acting lessons from Kristen Stewart?? WHAT HAPPENED TO HER!?

The rest of the cast was amazing in my opinion. I was more interested in Zombie and his story since I couldn’t stand what’s her bucket (heck I’m blanking on her name – and I’m not interested in remembering).

There were some things simplified that shouldn’t have been simplified like the scene where Zombie and the general have a little convo about what the hell is going on. The General seemed too eager to give in and tell Zombie all about the alien’s and the plan. Really? That is not at ALL how the scene went in the book. Zombie pretty much had to drag it out of the general. I get saving screen time and all, but it seemed so fake.

Now, the ending was good. It actually made me more curious to check out the second book in the series to see what happens next to the teens, the General, the aliens, and hot-ass Evan *drools*. They sure did pick someone pretty good looking to play Evan. ;)

In the end, I liked it. It was worth seeing on the big screen. I couldn’t stand the main actress…I feel like she didn’t even try for this. Which confuses me, because I have adored her in other films? The rest of the cast was good and I approve. There were some things too easily explained, so it felt like plot-holes that could have been avoided if better explained and acted out differently. It’s hard to say WHAT without giving away spoilers. Well….I’ve battled what rating I should give. I think in the end…I will give it 3 stars. Nearly a 4 like the book, but the main character really ruined it for me.  Hopefully she is better in the sequel.

I read the book and I don't feel like watching the movie, thank you very much.

I will watch it...one day