Joint Review: The Girl You Left Behind by Jojo Moyes

This month Blodeuedd and I will be discussing "The Girl You Left Behind" by Mojo Moyes. 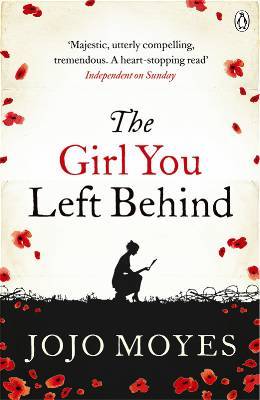 Author: Jojo Moyes
Title: The Girl You Left Behind
Genre: Historical Fiction
Pages: 544
First Published: September 2012
Where I Got It: Borrowed from library

France, 1916. Sophie Lefevre must keep her family safe whilst her adored husband Edouard fights at the front. When she is ordered to serve the German officers who descend on her hotel each evening, her home becomes riven by fierce tensions. And from the moment the new Kommandant sets eyes on Sophie's portrait - painted by Edouard - a dangerous obsession is born, which will lead Sophie to make a dark and terrible decision.
Almost a century later, and Sophie's portrait hangs in the home of Liv Halston, a wedding gift from her young husband before he died. A chance encounter reveals the painting's true worth, and its troubled history. A history that is about to resurface and turn Liv's life upside down all over again . . .

B: I had not read the blurb so I admit, this was not what I expected, I wanted stuff in the trenches, my bad ;) I was a bit disappointed, but as long the book is good it is good. How about you? Did you want some trench action?

C:  Happy Near First of February. ;) But yes, I did NOT expect anything that happened. I was thinking there would be more historical fiction with maybe a touch of POV from Sophie’s hubby.

B: I was so disappointed when Liv’s story began, I just love historical fiction! Yes Liv’s story turned out to be good, but damn, I wanted Sophie’s.

C: Ugh I agree. I wanted to read Sophie’s. I totally skimmed the majority of Liv’s story until about halfway when the court trial began, then my interest was piqued again! But I was looking forward to when Sophie’s POV would come back.

B: Yes, that was the best part and the one that made me angry. But I did hate that Sophie’s story was told through that.Sophie should have had another chapter.

C:  It bugged me too and I feel like it took away from her story. I wish that Liv’s story was a couple chapters long at the very end or something.

B: What did you think of Sophie’s story then?

C: I liked it a lot! SUPER, SUPER sad. I get the hatred towards the Germans since they have taken over your town and are aholes because it is war, but I don’t get why they treat people who have to act nice to them so they don’t lose their lives or stuff. Like that Lillien character. I felt so bad for both Sophie and the Lillien character...the town people were jerks to them.

B: Such jerks! When that woman said something about how she would not serve them, sorry now, but Sophie and her sister did NOT have a choice. Sorry we wont do that, oh well we will just die all of us instead. That woman would so need a kick in the butt. So yes townspeople are jerks. Poor Lillien, that was a tough one, and then how they turned later on too. Grrrrrrr. Group mob mentality. And yes Sophie’s story was great. The choices they had to make, the tough one too. My heart! And then then it stopped at the good part!!!

C: Such a tough one. :( And it broke my heart I had to wait SO long to wait and see what happened to Sophie and Edouard (her hubby). I’m glad all the lose ends were tied up at  the end, but I hated how it happened. I liked the end, but I didn’t like delivery of the ending - if that makes sense. haha

B: Truthfully, I did not even get the ending. Happy or not happy? Yes happy, but then? I really wanted a Sophie chapter there. I got no closure. Should we move on to Liv then?

C: Liv...she was okay….at first I didn’t get why she wanted to keep the portrait SO bad she would go to court….but then it made sense. At first I was in opposition and then I found myself being on Liv’s team and rooted for her to custody of the portrait.

B: I was totally Liv’s team. I hated how the press and strangers treated her. It was NOT Nazi loot, I hated how people dragged in that and then made her SO much worse than she was. yes yes it was still a painting with a shady past, but, srsl, lots of stuff was taken. And most importantly, those jerks should not have the painting. They only wanted to sell it! If anyone should have had the painting it should be Sophie’s family, and I did feel like Liv felt like that too. Like if she had to give it up she would have done just that. I kept waiting for like that grandson, wait son, whatever he was to Aurelien to show up and be all like, back off!

C: I wanted the family to have it, but then family - the WHOLE family - turned out to be NO better than the townfolk, even generations later. Jerks the lot of them. And it was NOT Nazi loot...I HATE how everything relating WWI or WWII is automatically stemmed to Nazis ugh - so annoying. Ugh...Aureliein smh he upset me.

B: He was such a jerk. Ahole, I liked the son better. Speaking of loot. I was at my grandparents once and was all, weird painting. And grandma was all, yes her dad brought it home from the war. Sorry, but my family have loot on their wall. To be fair, it is from our own people when they left everything behind to flee from the land Russia stole.

C: I think everyone who fought in the war has a piece of loot. Both my grandpas have something small too. That is what happens during war on both sides. Ugh, I am still mad and feel so bad for Sophie….for everything she did for everyone. I also kinda felt bad for the little piggie. xD What did you think of the Kommandant?

B: Conflicted!!!! I like him cos he saw everything and saw between his fingers. So many things, like the piggie. But at the same time, he did bad things too. But but, oh, it is so hard. But then he was just a man. If the French had occupied a German village they would have done everything the same. War is always written from the winner’s POV. War makes everyone assholes. It’s like with WWII fiction and every German is a nazi...eh no. That is like saying that every American is a racist cos there used to be slavery, or there was the Ku Kux clan, or well it’s that with every country.  I have totally lost my train of thought now…

C: I liked him, but then he did bad things. But like you said...it's war...war makes even good men do bad things, but the winner writes history and now the good guy.

B: Final thoughts? It was good and it made me ANGRY. Made me sad. A good book does bring out emotions so I would say it was a good pick :) Even if I had written it differently, like ditching Liv all together.

C: It was good. I wanted to love it, but I just liked it thanks to Liv’s tale. Best pick in a while though!!! ;D And if I had written it I would have done Sophie’s story and then do a couple chapters at the end of Liv and the battle of the painting just so we can find out what happened to it.

B: Your turn next then. Just...do not pick a story about a village occupied by Germans, it was my 3rd in 6 months. oooops.

C: I’ll also have to not do a PNR since I’ve read three in the last month and a half. xI We’ll find something ;) The end? 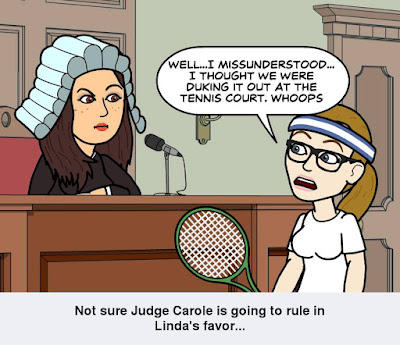 **Carole's Conclusion**
This was okay. Fell a little below my expectations, but it was still okay. I was bummed Sophie didn't seem like the main character, because Liv's story seemed to take over. To simply put it...I liked the story, but I hated how it was formatted and presented. Out of five stars, I stamp this with 3 stars.