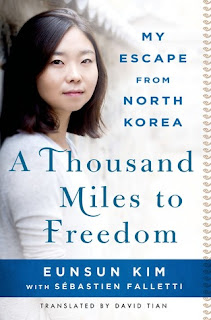 Blurb:
Eunsun Kim was born in North Korea, one of the most secretive and oppressive countries in the modern world. As a child Eunsun loved her country…despite her school field trips to public executions, daily self-criticism sessions, and the increasing gnaw of hunger as the country-wide famine escalated.
By the time she was eleven years old, Eunsun's father and grandparents had died of starvation, and Eunsun too was in danger of starving. Finally, her mother decided to escape North Korea with Eunsun and her sister, not knowing that they were embarking on a journey that would take them nine long years to complete. Before finally reaching South Korea and freedom, Eunsun and her family would live homeless, fall into the hands of Chinese human traffickers, survive a North Korean labor camp, and cross the deserts of Mongolia on foot.
Now, in A Thousand Miles to Freedom, Eunsun is sharing her remarkable story to give voice to the tens of millions of North Koreans still suffering in silence. Told with grace and courage, her memoir is a riveting exposé of North Korea's totalitarian regime and, ultimately, a testament to the strength and resilience of the human spirit.


My thoughts.
Now and then I read a memoir. I have read some good ones, I could not put down Malika Oufkir's book, Wild Swans moved me, and Leaving Mother Lake was so interesting. While this book failed in that aspect, it was the simplicity of the book. It was just too simple for what it was about.
I wanted more horror, misery. Ok so that might sound bad, but I just expected more from a book about North Korea. But then the book was not really about North Korea, it was about trying to survive in China.
I was told about starvation and how relatives and friends died left and right. Yes that is horrible, but that was the only horrific part she ever knew. I learned they were given 1 kg of candy on their glorious leader's birthday and how the capital was the most wonderful place ever. But then she could not tell me about prisons, work camps and executions cos she only knew a good life, the starvation and then China. In that aspect I was not really moved by her tale. A simple YA like tale. Where things were mentioned that we had already been told before. I also did not like how she totally dissed Mongolia and how they lived there. So that is worse than North Korea then?
So do not expect to learn more about North Korea. Maybe she was not critical of NA enough for me.
BUT, it was still a good and short book. Interesting in those early NA parts and later the China parts that made me angry. They are just throwing them back into that hell.

Damn....good for her. That is certainly a feat.