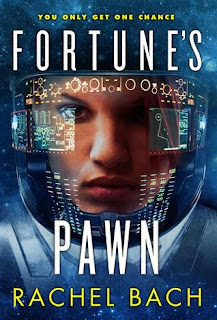 Blurb:
Devi Morris isn't your average mercenary. She has plans. Big ones. And a ton of ambition. It's a combination that's going to get her killed one day ­ but not just yet.

That is, until she just gets a job on a tiny trade ship with a nasty reputation for surprises. The Glorious Fool isn't misnamed: it likes to get into trouble, so much so that one year of security work under its captain is equal to five years everywhere else. With odds like that, Devi knows she's found the perfect way to get the jump on the next part of her Plan. But the Fool doesn't give up its secrets without a fight, and one year on this ship might be more than even Devi can handle.

I did say I wanted to try more sci­fi, and this was more of the kick­ass variation. I know some said it was romance too, but I would not say that. The "romance" was such a tiny part. Even a kick­ass woman can have some fun too.

Devi is a merc who wants to rise in the ranks. She went from soldier to mercenary and she is aiming high. The king's guards. But do get there you have to spend like 20 years showing your worth. And a mercenary never lives long. I did like her drive. And when she got the opportunity to work 1 year on the most cursed ship in the galaxy she took it. So she was driven. She loved her guns, armour. She loved her job.

What I liked about the book was that mystery why the ship was so cursed. How did they always end up in sticky situations? What is going on with the crew? The hot guy? I kept rooting for her.

And wanting to know more.

In the end what we have is a kick­ass sci­fi book. Mysteries, a tiny but of romance and an interesting world. Her homeworld was the best. I loved the whole feudal, godking advanced society. Very cool.