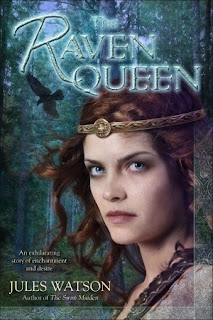 Blurb:
She was born to be a pawn, used to secure her father’s royal hold on his land. She was forced to advance his will through marriage—her own desires always thwarted. But free-spirited Maeve will no longer endure the schemes of her latest husband, Conor, the cunning ruler of Ulster. And when her father’s death puts her homeland at the mercy of its greedy lords and Conor’s forces, Maeve knows she must at last come into her own power to save it.
With secret skill and daring, Maeve proves herself the equal of any warrior on the battlefield. With intelligence and stealth, she learns the strategies—and sacrifices—of ruling a kingdom through treacherous alliances. And to draw on the dangerous magic of her country’s oldest gods, Maeve seeks out the wandering druid Ruan, whose unexpected passion and strange connection to the worlds of spirit imperil everything Maeve thought true about herself—and put her at war with both her duty and her fate.


My thoughts:
Some books have that, omg there was magic in the past! feeling, and some do not.


Here the author had Iron Age Irish people living in a world where Gods and Goddesses were heard. Were the Sidhe were around. Where there was magic. But, I did not believe in it. It was historical fantasy, fun to read, but not real.


It's the story of Queen Maeve, who went down in history as a maneater, but then history changes when men write it, Christian men. She was married to kings and princes. She loved her country, and she wanted to fight for it. I did like her strength.


The story of Deidre is told in the background too, but she has her own depressing book.


I could actually have done without the real magic, and the weird druid guy who spoke with the Sidhe. I am sure people will love that, but as I did not have that omg magic used to be real feeling, it just fell short for me.


And I did know the legends, so I knew what would happen. Still it was interesting to see how she changed things. Though I do confess that I did not understand the ending at all.


Good. But could have been amazing...

I picked up this book and put it down. I enjoyed her other books, so maybe I might be able to make it through!