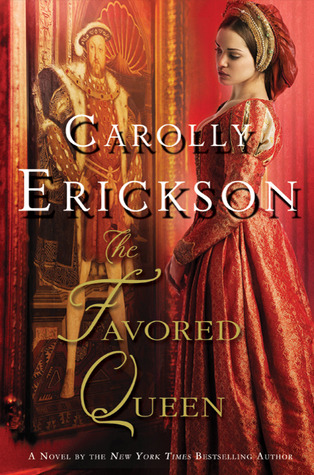 "Born into an ambitious noble family, young Jane Seymour is sent to Court as a Maid of Honor to Catherine of Aragon, Henry VIII’s aging queen. She is devoted to her mistress and watches with empathy as the calculating Anne Boleyn contrives to supplant her as queen. Anne’s single-minded intriguing threatens all who stand in her way; she does not hesitate to arrange the murder of a woman who knows a secret so dark that, if revealed, would make it impossible for the king to marry Anne.

Once Anne becomes queen, no one at court is safe, and Jane herself becomes the victim of Anne’s venomous rage when she suspects Jane has become the object of the king’s lust. Henry, fearing that Anne’s inability to give him a son is a sign of divine wrath, asks Jane to become his next queen. Deeply reluctant to embark on such a dangerous course, Jane must choose between her heart and her loyalty to the king.

Acclaimed biographer and bestselling novelist Carolly Erickson weaves another of her irresistible historical entertainments about the queen who finally gave Henry VIII his longed for heir, set against the excitement and danger of the Tudor Court." For this review, B and me decided to do a joint review! If it's successful, we'll be doing a monthly joint review! Fun times! We did a Q&A for this book. At the end of the review, I typed a few more words about how I felt about this book:

1) There are a lot of complaints of the historical inaccuracies in this book, what do you think/feel about the liberties taken by the author?
B: I understand the complaints and sometimes stuff like that truly bother me. But it mostly has to do with language or how they act. Here it was more that she yes took liberties about facts and hey I can roll with that. It's fiction, it has to have some drama, cos else it becomes dry and I become bored. If I did not sign up for non-fic I do not want that. But sure there were things that were a little too much...


C: I'm an open-minded lady when it comes to to entertainment and the liberties they take in books and movies. I get it...some aspects of history is boring for those that don't like history (or even those who do). The author took A LOT of liberties, but I have come to realize she does that in all her books. For this one...there were a few scenes I couldn't help but laugh at or roll my eyes or get annoyed. However, compared to some of her other books, this one was not too bad.


2) What did you think of how the author portrayed Jane Seymour?
B:I have never really had an opinion about Jane. Mostlty because people write about Anne, Anne, Anne, omg I am so over ANNE! Sure, a bit too much Anne in this one too, sigh. But anyway, Jane, I liked her, she was sensible, most of the time.


C: I applaud the author for how she portrayed Jane. I normally don't like Jane (and I still don't), but it was nice seeing this side of Jane. Jane was stronger and not so idiotic like in other adaptations. I feel odd...because I liked her. 0.0


3) What do you think would have happened to Jane's son, Edward, if he had lived a long, full life?
B:Carole answered this before me and damn she nails it. Yes I am sure the world would have thought of Henry as an ass, and I am sure Edward would have to try to re-write history a bit to make his dad better. And because of this father I think he could have ruled well and ok let's not talk about everything Like maybe no Spanish Armada, aww the possibilities.


C: Oooooh. Tough one. Ummm, honestly, I think Henry VIII would not have been as remembered. He was remembered because he was an ass and because of his two daughters. Edward would have been remembered instead.


4) What Queen (Catherine, Anne, or Jane) would you have stood behind? Or would you play neutral?
B:I would definitely go for nneutral It was not a good court to be a part of. I would try to play it as safe as I could and for GODS sake hope that Henry did not look at me. But if I had to choose I queen I would go for Catherine.


C: I wish I could say Queen Anne, but she was certainly hated in reality and in the book. Everyone hated her for "seducing" the King and kicking Catherine off the throne. I would have played neutral, honestly. Just go along for the ride and not kick up too much dirt. It's bad to say, but King Henry and his bipolarness scares me. hahaha


5) Would you marry King Henry VIII? If not, why? If so how come? Though...like you had a choice. ;)
B:Young Henry, not old. But rather no Henry. He was way too lusty, but then which king would not be? But his problem was more the hacking of heads things. Did you look at that guy?! Off with her head! Yeah, no thanks Henry. I'd rather be his mistress, cos then he would just hopefully send me away and give me stuff and make me marry someone else.


C: Mmmmmmmm, maybe young Henry. Not old Henry after Jane. Bleurgh. He was gouty and HUGE! I would not want Queen Catherine Parr's fate to take care off an elderly, sickly man while I am super young and be afraid he would get grumpy and have my head hacked off.

6) Would you be a nun, peasant, or court lady in this time of the book? Your choice.
B:A nun would be good, but sigh, how boring! Not to mention..ahem...well you know.
A peasant's life would be so hard and I am seriously lazy.
Lady it is. I would be a pawn of my father, of my brother, married to some guy, playing dangerous games, but hey at least I'd have  better chance of surviving if I got sick.


C: I really wish I could say I would be content as a peasant or nun...but I would be a court lady. It is dangerous and can seriously stink especially with arranged marriages, but alas...you have nice stuff and you for sure will have food on your table. I would keep my head down and stay away from political stuff though. Not worth getting my head hacked off.


7) Do you think the King felt anything for Jane or was she just a baby machine? And what about our dear King's sperm count? SO many ladies, so few living kids?
B: She was tolerable, she could be fertile. Yes why not give her a chance if it does not work out just get rid of her. I mean he knew how to now.
As for his sperm, yes that was my question. Sure he had kids (mostly the bastard ones), but still he spread it around a lot. I did read this interesting article after this and sure maybe. But like Carole will say, we would need that blood to check.


C: No. At this point, he was desperate for kids. I think the first two wives broke his heart, so he was over love. He just wanted a baby boy. He only "loved" Jane because she gave him a son.  I think there was something wrong with the King or how he treated his preggo girls. He stressed them out and it caused miscarriages. Also, there is a theory that the RH factor of the blood types might have had something to do with the first two wives. I wish we could do some blood work on him!


8) Which character was your favorite? Least favorite?
B: Favorites, *coughs* Honestly no favorites.  But, yes I am partial to Catherine, so her.
Least favorites, Henry, but that is obvious. Anne, cos I DO not like her.


C: My favorites were Jane (oddly), Anne (even tho she was super bitchy in this one), & Charles Brandon. My least favorite was King Henry (he was a super ass and he nicknamed Anne "puffball" or something like that - what? Really? Stupid nickname), the Prophet Nun (*shakes my head*), and the guy - I can't remember his name - who almost killed Anne (I get it...she had the Sweating disease, but you sir are an ass).

*A few more words from Carole*

In summary, this was an okay book. Certainly better then the last one I read from Carolly Erickson. This was light and a quick read. I am Team Anne, but it was nice reading about Jane for a change. Honestly, this is my first book in Jane's POV. Crazy, right? Anne was a total and utter bitch in this book, but Jane would perceive this especially when she was trying to win the heart of the King and Anne fighting back.

Like I said above, there were a few scenes that were cheesy/made me annoyed/I rolled my eyes at, but overall, it was an interesting take on Jane and her story. I would recommend it for people that don't mind historical inaccuracies and are looking for a light and quick read about a queen. In the end, I shall stamp this with.....2 stars. We need to plan for the next one ;)