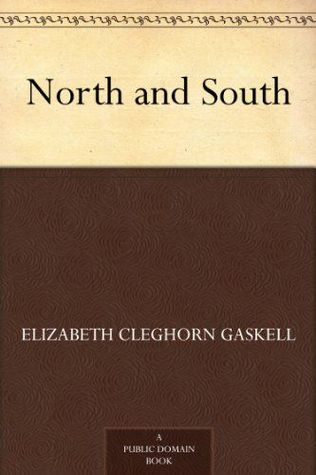 When her father leaves the Church in a crisis of conscience, Margaret Hale is uprooted from her comfortable home in Hampshire to move with her family to the north of England. Initially repulsed by the ugliness of her new surroundings in the industrial town of Milton, Margaret becomes aware of the poverty and suffering of the local mill workers and develops a passionate sense of social justice. This is intensified by her tempestuous relationship with the mill-owner and self-made man, John Thornton, as their fierce opposition over his treatment of his employees masks a deeper attraction. In North and South, Elizabeth Gaskell skillfully fuses individual feeling with social concern, and in Margaret Hale creates one of the most original heroines of Victorian literature.

Okay...I am going to say something rare and strange...I actually liked the TV movie better then the book. I tried reading this a while back, but it was a DNF. After watching the TV movie, I had to re-read it and give it a second chance. Don't get me wrong the book was okay and I enjoyed the journey. I loved the love story, the personal growth, the social issues, and the drama in the book. However, I did like the TV movie better for one simple fact: I was never bored.

The author is compared to Jane Austen a lot, but I have to highly disagree. There were many moments that I could not put the book down, but the majority of the book I was bored. I hated how she focused on certain things and dragged on and on and on. Somethings needed the detail, but somethings did not. I also hated how she portrayed the characters. Especially John. I did not like him that much. Maybe I am biased bc I adored the actor who portrayed him in the TV movie, so it was easy to ignore his flaws. IDK, but in the book I really wanted to punch him all the time. I did want to punch him in the TV movies as well, but not as badly as in the book. The character development was seriously lacking in the book. There was little growth between Margaret and John.

Now the characterization of the minor characters were amazing. They were 3D and helped make the story even better. One character knocked some sense into John and gave him some obvious truth. Oh John Thornton. SMH. I like you, but idiot. Okay, I get it...it is historically correct and all that jazz. Any man of that time period would think and feel the same way until the truth came out. But still....you claim to be utterly in love with her....sighs.

The ending was long and drawn out, but I loved the last page/scene. It made the journey worth it. It took FOREVER for the love, but it was well worth it. No insta-love and easy HEA here:

In the end, this was an okay read and I am glad I gave it a second try. However, I will admit that I adored the TV movie waaaaaaaaaay more. It was mostly due to the writing style and how the author presented the story and characters; she is no Jane Austen, sorry. The final couple pages were well worth the journey though. I recommend this to those that like the classics, it is a read everyone should attempt. I shall stamp this with 2 stars.

Oh I'm sorry to see it didn't work for you. I confess that the cover don't attract me lol so not sure I would have read it... but well maybe on TV

Sometimes movies work better than books and I agree, Gaskell is very unlike Jane Austen although they did share some of the themes.

Melliane, 'tis okay. :) I still love the concept tho

Ana, sometimes. It is rare, but it does happen. Yes, they share similar traits but she is no Austen.