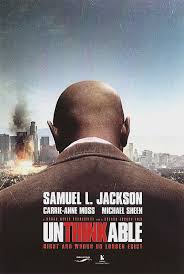 SUMMARY:
Armed with the knowledge that their suspect has planted three nuclear bombs in three U.S. cities, black ops interrogator H (Samuel L. Jackson) and FBI Agent Helen Brody (Carrie-Anne Moss) resort to extreme methods to get the confession that could save millions of innocent lives. A former nuclear expert, Younger (Michael Sheen) has turned against his country. Shortly after Younger plants his bombs, he's apprehended by the nation's top anti-terrorism task force. But while Younger is in custody, the FBI can't get him to reveal where the nukes have been hidden. H may be able to get an answer, but once Agent Brody gets a glimpse of his tactics, she begins to wonder whether the good guys have finally stooped to the level of the terrorists, or if H is truly justified in fighting fire with fire.

REVIEW:
It's been a while since I watched this...but I shall try and recall as many of my thoughts as I can on this film.

Alright, this was a movie that made you think. It made you feel and it made you question yourself as a person. It also makes you think about wrong vs. right. After watching this my views on torture and all that has shifted just a tad bit. Should removing fire with fire be the right choice? If torturing and possibly even killing someone will save the lives of millions, should we allow it to happen? Personally, would I kill or torture in the name of saving not only my fellow citizens, but other people from other countries as well? I simply loved the way this movie made me think.

I loved Samuel L. Jackson in this. He was excellent! I loved the rest of cast as well. I found the dialogue a little off at parts and cheesy once in a while, but overall the acting and plot made up for the dips in script.

Honestly....I am curious as to why this film isn't more well-known...why it wasn't more popular.

The only thing I didn't like about this was the torture scenes (well one scene in particular). I have a weird reaction when someone's fingers are broken or whatever. I don't know why it bugs me so much...it just does. I get queasy and I have to look away. Not just in movies or TV, but it real life as well. That one scene really made me gag and have to look away.

Plus I wasn't a big fan of any of the characters or of even the end. There was something that bugged me. I can't lay a finger on it....but it bugged me. Don't get me wrong...it had a good ending and it fit well. But, gah, I don't know. Maybe I expected something different.

All-in-all, it was a good film. I'm so glad boyfriend made me watch this. It's really thought provoking. Though the dialogue was left to be desired, the acting made up for it. I would recommend that people with tough stomachs watch this. I did well until the finger bit *shudders* Anyways, yeah, if you think you can handle it and you like movies that make you think. Watch this. I give it four stars overall. ^.^

Have I seen this one? ...I really can't remember

Hmm, I've never heard of this one. Sounds like a great watch and suspenseful too. Thanks!

B, watch it again! free on crackle I thinks. mhmmm

Melissa, you should! It's really good.