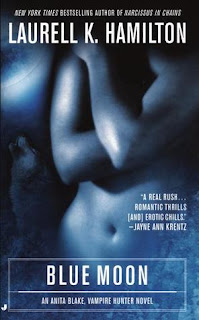 "When she chose master vampire Jean- Claude over her ex-fiancé, alpha werewolf Richard Zeeman, Anita learned that sometimes love is not enough. But though she and Richard won’t be walking down any aisles, she can’t turn her back on him when he’s arrested on a rape charge in Tennessee. Anita knows firsthand that Richard has the morals of a saint—or at least a boy scout. But his guilt or innocence is not the issue. He’s behind bars, and in five days a full moon will rise…"


Yes, I not only read the book but I listened to a few hours of the audio-book. I've found that listening to the audio-book on my to school has helped me to finish the book faster. I'm not a huge fan to audio-listening, because I tend to drift off and daydream. I don't mean too, but I do. From many sources, I heard that Kimberly Alexis does a fantastic job reading Blue Moon, so I decided to give this Auto-book a shot and I was not entirely disappointed...


BOOK:
Well, this is the 8th book in the Anita Blake series and I still have MANY to read. I wish I could say that this would be a good stand-alone book, but I really believe that you need to read the others to understand some of the main points and references, but Laurell K. Hamilton does try to keep the reader updated. Usually at this point, many series begin to dry up and shrivel up like leaves on the ground. That's not the case with this series (yet). I am dying to know what will happen  in the next book! I didn't waste much since  Burnt Offerings to read this one. So far Laurell K. Hamilton has kept my interest in the story as well as the characters presented.


I really liked this one. I really excited because Jean Claude wasn't on main stage. Just that fact made me giddy to read this. He did pop up in the beginning and he was referenced here and there, but his dumb face was not really part of the story. It mostly focused on Richard and the other shapeshifters, which made me happy. I personally prefer my werewolves (or whatever) to blood-sucking vampires. Unlike many I don't find vamps that "sexy". Eh, that's another story...


Anyways, I find Laurell K. Hamilton's writing addictive, so it was hard to put this down or turn of the CD. I couldn't even fathom how this was going to end! Which I like. I may hate surprises, but I do like being on the edge of my seat and that's what I got from this. There was a lot going on, but I liked it. It was a slightly chaotic at some points, but I believe that the author did a wonderful job keeping the chaos an organized mess.


I oddly also loved the fact that this was more dark, serious, and sexy than any of the other books. Yes, many of the others in the series were dark, serious, and sexy, but this went a step further. The plot was more serious and darker things were coming to play on Antia's playground. Like Demons, psychotic Eunuchs, morbid artifact collectors, dirty cops, rotting vamps, and more werewolves than you can count! And yes, there was a lot more sensual and sexy scenes. For some reason I felt that they fit into this one, because werewolves and other shapeshifters tend to be touchie-feelie. For some reason all that fit in well together.


OK. There was a lot of reasons why I liked this book, but there are a lot of things I could NOT stand. I know that the author wants to keep the reader informed, but C'MON! I am so tired of the repetition and the old news. Especially on how "sexy" Jean Claude is. Ugh. We all know he has fabulous hair and eyes and blah blah, but I feel like she literally cut and paste some of her old material and added it to this book. I hate repetition with a burning passion and I kept noticing it.


There were also a lot of anti-climatic points which made me a little upset. Okay, I don't wish for the death of someone (even fictional characters), but she builds up soooooo much drama and emotion and I feel like I'm about to cry. BUT somehow, someway Anita or whoever saves the day at the last second. Okay, I can understand here and there but every single person? Every single time? Really? That's not possible especially when *SPOILER* Asher was pretty much a goner. He even gave a pretty heartrending final speech BUT somehow Anita gave up her morals let him suck her blood. But he just drank a little and was like, "oh I wasn't really dying, I just wanted to feel your power" and whatever. Really? *SPOILER ENDED* I don't know, but when there is an anti-climatic moment I feel deflated and have to put the book down and go do something else.


I'm not a huge Audio-book fan, because my mind drifts. I can't stay focused while some person rambles on and on. However, my mind didn't drift too often for this one. It did at the beginning, but that was because of Jean Claude and his stupid "sexy" French accent. I really liked Kimberly Alexis' voice. I found her voice surprisingly close on how I think Anita's voice sounds like. Odd, right? I also liked the sound effects that they put in there.


At one point I found myself so engrossed with the story that when they gave a gun shot sound I jumped. My heart even began to race during violent scenes and intense scenes. I thought it was kind of funny, because I was more engrossed with the Audio-book than with the book at certain points.


ALL-in-all, I really liked this book even though I wanted to slam my head against the wall because the repetition and anti-climatic points were annoying. I can't to read the next book! If the voice is done by Kimberly Alexis, I will defiantly check out the Audio-book too. If you are a lover of fantasy, supernatural things, mysteries, or just a plain good book check out this series and this book. You won't be disappointed.  Out of five stars, I grant this one.......4 stars. ^.^


Favorite Character(s): Anita (I'm beginning to like her again), Richard (he's just so darn cute and nerdy), and Shang Da (he's my super hero and my book crush, if I could talk to Laurell K. Hamilton I would ask her to write a book solely about Shang Da and star me in it *winks*)
Not-so Favorite Character(s): Jean Claude (grrrrr) and Wilkes (dirty cops girts my girdle) 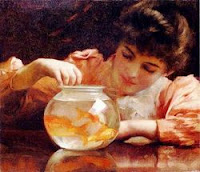 Lol, well yes I would get annoyed to if someone time after time told me how sexy someone was. Ok 'nuff said! We got it the first time

hahaha thats what I kept thinking! I mean after 8 books I know what he looks like and how freakin' sexy he and his french accent is.