Book Review: Touch of the Wolf 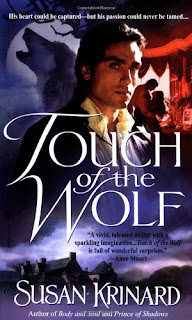 (I actually finished this a couple days ago, but I was having a hard time finding time this weekend to type this up. Well, now that my hectic weekend is over, I have found the time! Woot woot!)


"Braden Forster, Earl of Greyburn, has devoted his life to restoring the purity of his clan's werewolf blood. He spent years searching in vain for a distant American cousin, a woman whose pure wolf bloodline is a vital link in his family's heritage. Braden had thought Cassidy Holt was lost forever--until she appeared one rainy night on the steps of his London mansion...her raven hair in disarray, her skin scented with sunlight and sagebrush. As Braden whisks young Cassidy to his family's secluded country estate, both can sense their undeniable attraction.


But Cassidy soon learns that they can never satisfy their mutual passion; Braden has already betrothed her to another. Her only hope of claiming the one man she'll always love is to unravel the dark and lustful secrets of his past--"


Alright. I had a reaaaaaallllly hard time getting through the first few chapters, because 1) I was very confused and 2) it seemed to drag on and on, even though it was quick paced. The reason why I was confused was because I skipped the prologue (which I always do), but then I realized I actually have to read it this time and I did and it cleared EVERYTHING up. Thank goodness. Perhaps I would've been more into the first few chapters if I had read the prologue first. I guess there is a good message for all of us prologue-skippers....


Anyways, once I got past the prologue and the first few chapters, I was sitting pretty. I could hardly put the book down! The characters and the plot were intriguing and interesting. I wanted to know what was going to happen next and what the character's futures were. Each character felt real and had real human/werewolfy flaws. I may not have liked every character, but by the end of the novel I understood why they were the way they were.  I also loved the fact that the author had Braden (the main dude) be blind. I'm not saying that being blind is a good thing, but I do get really tired of perfect characters and having a blind hero is a risky step to take and I applaud Susan Krinard!


The Cause caused a lot of pain and hurt to all the characters, especially Braden. The Cause was Braden's whole life and he was addicted to being the leader of this movement to preserve the werewolf bloodlines. I loved how Susan Krinard created this "Cause" and intertwined it into the story. It created a lot of hurdles for our two lovebirds and even for the other characters. The Cause, in my mind, was a double-edged sword, because it was saving the werewolf bloodlines, but it was also forcing people into marriages and tearing the Forster family apart.


Besides for the beginning, there was one more thing I didn't like: Throughout the book I felt....confused and baffled. I can't really say why, because I don't want to spoil the book, but there were many rumors flying around about Braden and his late wife...I know that Susan Krinard wanted the reader to feel unsure of the truth and whether or not Braden was a bad guy or good guy. However, the truth flipped flopped so much that by the end I wasn't even sure if the "final" truth WOULD be the FINAL truth. It's really hard to explain, but I tried.


All-in-all, I really liked this book. It was a fun read and it featured my favorite paranormal being: the werewolf. I guess you can call me a werewolf gal. It is the first of the series and I do plan to read the others sometime in the future. I recommend this to those who love a good Historical Romance and Paranormal mix. Out of five stars, I grant this one 4 stars. In all reality it would be 3.6, but I don't give decimals so I rounded.


Favorite Character(s): Is it bad that I didn't have any real favorite characters? I mean I didn't hate everyone, but I didn't really LOVE anyone. Huh...I was neutral to many of them.
Not-so Favorite Character(s): Rowena, she (along with many of the others) was very selfish. Yes, I know she wanted to be free to make her own decisions and blahblahblah, but really? If she had just stuck it out....*sighs* oh well.

This sounds like an interesting book, maybe not a pick up now and read, but a rather good book!

I always skip the prologue too, and those introductions from other author also. Don't you hate it when you're really confused and then it was a simple thing to clear it up such as reading the prologue.

Allison, it was pretty good! I think you'll enjoy it.

Lisa, another prologue skipper! *hugs* Er, sorry. lol, but yeah I could have avoided a lot of confusion if I just read it to begin with it.

Prologues can be evil, I once read one that had the couple die, so yes I read the book and sure they died at the end, made me md

Bloduedd, I read a book like that too! It announced that the heroine would die and everyone would be super miserable. lol. It made me mad too.