Book Review: Johnny Got His Gun 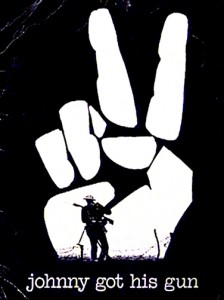 Author: Dalton TrumboTitle: Johnny Got His GunGenre: Anti-war, Classic, War, Philosophy  Pages: 256First Published: 1939Where I Got It: Erick, at work, told me to read this and let me borrow his copy


"This was no ordinary war. This was a war to make the world safe for democracy. And if democracy was made safe, then nothing else mattered—not the millions of dead bodies, nor the thousands of ruined lives...This is no ordinary novel. This is a novel that never takes the easy way out: it is shocking, violent, terrifying, horrible, uncompromising, brutal, remorseless and gruesome...but so is war."


I feel like that summary from Goodreads doesn't give a great description of what the book is about. The book is an anti-war novel that focuses on a soldier from WWI, Joe Bonham, who finds himself in a hospital bed. He is deaf, blind, mute, has no legs, no arms, and he pretty much has no face. However, he is still alive and his brain works perfectly well. The story is told by Joe who tends to drift into the past and relive major events. He also does a lot of thinking. Mostly about the war and his family and what everything means.


If you can't tell this is a very morbid and dark story. This books shows the very evils of war. Yes, we hear about men and women dying, but we really ever hear of those so horribly maimed that they lose themselves. Some are physically maimed, others mentally, and in a lot of cases...both. It really makes you think about what we sacrifice when peace can't be made unless through blood. Politicians send out the cry for the citizens to grab there guns and fight, but how many politicians do you see run onto the field of battle?


I can't really say I loved this book, but I don't hate it. It's one of those books that bring the truth to the surface. I really liked the meaning behind the book and that it makes you think. You think about past wars and the present wars. How many of them were really worth fighting for? Was it worth all the blood and terror? Could there have been other ways to achieve peace?


My favorite thing about this novel would have to be the title. I find it morbidly and ironically funny. You know the World War I song Johnny Get Your Gun? It's a play off that song and it fits the book well. Just the title alone made me want to read this. Dalton Trumbo did a wonderful job making the read think. He also used symbolisms and similes to his advantage. My "favorite" one would have to be about the rat eating the dead solider. Here's a little snipbit from Sparknotes, I feel like this would explain the rat symbolism far better than I can (don't worry it doesn't contain any real spoilers):


"Joe dreams that a rat eats from the open wound in his side. The rat is part of a memory that Joe has from the war, when he and other soldiers found a dead Prussian soldier with a rat eating his face. The men chase the rat and beat it to death and feel silly afterward, but Joe recognizes the rat is the true enemy of all the soldiers. The rat represents the warmongers who stand to profit from war, just as a rat feeds itself off of the decay and injury of wounded or dead soldiers."


Okay. This book was a mood killer. I hate to say that, but it really was. I love my anti-war novels and novels of similar taste, but they usually have some silver-liner or some sort of hope. There is a some taste of "hope" in this novel, but its filled with so much sarcasm I wanted to applaud. It took me a little while to finish, because I found my mood reflecting the book and I just wanted to cry sometimes. It wasn't because it was dark or morbid, but it was my pity for Joe. They wouldn't let him die and they didn't want the public to see him, because they feared people wouldn't want to fight anymore. Poor guy.


All-in-all, I'm really glad Erick made me read this. I did like it and it really made me reflect on past wars and out present wars. It also fueled my disappoint in Government and politicians worldwide. They create these wars and then sit back and watch the "peasants" fight and die. Those who come back are never the same.


However, the dark mood, lack of hope, and Joe's situation made me depressed. I recommend that everyone reads this someday. Yes, I believe some wars are necessary, but other options should be considered first before giving the war-cry. I'm part of a military family and I still hate war. Out of five stars, I grant this one 3 stars. I would give it 5 stars, but....I don't know.


Favorite Character(s): Joe (he seemed like such a great guy and you can't help but be emphatic towards him) and New Day Nurse (she is a sweetheart and she really cared for Joe)
Not-so Favorite Character(s): The General/or whatever who came and visited Joe (he and everyone else involved are asses. Gah.)
Quote(s) That Stuck With Me: The General or whatever he was tapped this on Joe's forehead (Morse Code), "WHAT YOU ASK IS AGAINST REGULATION WHO ARE YOU"

And now I forgot what I was supposed to say. I really should not leave tabs open and answer long after I have read a review :)

Hahaha, it's okay. That happens to me all the time. =D