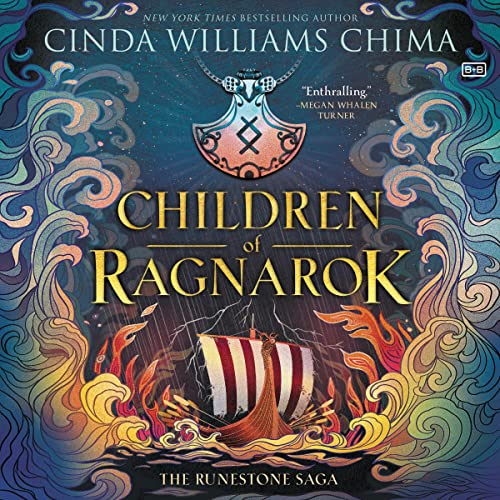 YA Fantasy /to review

Eiric and Liv get in trouble with their stepdad's relatives. But he and they are aholes after all. And now Eiric is charged for murder, and no way out.

Set after Ragnarrok, the gods are dead. Magic is disappearing. Monsters are less seen (I mean that is good and all). And some says they gods might come back. Oh, that I actually want, hey give is that!

I kept wondering this one thing, why is he called Halvorson, when his dad's name is Leif? You get your dad's name, not inherit some older name. That's like only 200 years old. Yes, things like that bug me.

Then there is Reggin, a slave with a weird master. I wonder about that, is this so YA that he will suddenly turn nice, or become a love interest? That would be bad.

Anyway, these all will meet and all Hel will break loose. Because there is still magic in the world, and so much more.

It was long, lots happened. I do not want to say too much. I did hope to hear something about wakening gods, but sadly not. Maybe in the next one.

I did like it, and I wonder what will happen next. Not something good. Things turned out really really bad.

Good narration. Everyone had good voices that I always knew who was where and when

Since Ragnarok—the great war between the gods and the forces of chaos—the human realm of the Midlands has become a desperate and dangerous place, bereft of magic.

Sixteen-year-old Eiric Halvorsen is among the luckier ones—his family has remained prosperous. But he stands to lose everything when he’s wrongly convicted by a rigged jury of murdering his modir and stepfadir. Also at risk is Eiric’s half-systir, Liv, who’s under suspicion for her interest in seidr, or magic. Then a powerful jarl steps in: He will pay the blood price if Eiric will lead a mission to the fabled Temple at the Grove—the rich stronghold of the wyrdspinners, the last practitioners of sorcery.

Spellsinger, musician, and runecaster Reginn Eiklund has spent her life performing at alehouses for the benefit of her master, Asger, a fire demon she is desperate to escape. After one performance that amazes even herself, two wyrdspinners in the audience make Reginn an irresistible offer: return with them to the Temple to be trained in seidr, forever free of Asger.

Eiric’s, Liv’s, and Reginn’s journeys converge in New Jotunheim, a paradise fueled by magic and the site of the Temple. They soon realize that a great evil lurks beneath the dazzling surface and that old betrayals and long-held grudges may fuel another cataclysmic war. It will require every gift and weapon at their command to prevent it.

Mhmmm I am intrigued.

It would be a good tv series ;)