Blodeuedd's Tuesday Review: A Week to be Wicked by Tessa Dare 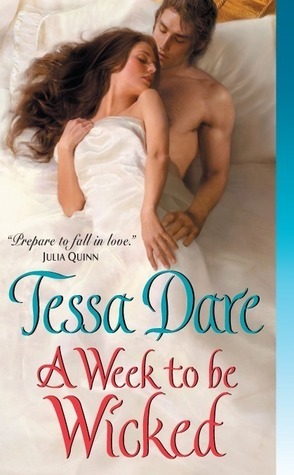 Not exactly my favorite Dare book. I did finish because it was easy and light, but, yes I felt no romance. It was more like bam wham thank you mam. They fancied each other and got dirty. And they had disliked each other the day before. AND they only spent this week together. I just want a bit of romance you know.

Minerva liked rocks. Colin could not sleep without a good fu*k. She was the would be spinster. He needed to marry. Sure I could see them together at the end, but that might have been the smexy chemistry between them.

I did like him making up stories about who they were while travelling, but I could have gone for a bit more actual romance to make me feel something.

Minerva Highwood, one of Spindle Cove's confirmed spinsters, needs to be in Scotland.

Colin Sandhurst, Lord Payne, a rake of the first order, needs to be... anywhere but Spindle Cove.

These unlikely partners have one week to

• convince family and friends they're in "love"

• travel four hundred miles without killing each other

All while sharing a very small carriage by day and an even smaller bed by night.

What they don't have time for is their growing attraction. Much less wild passion. And heaven forbid they spend precious hours baring their hearts and souls.

Suddenly one week seems like exactly enough time to find a world of trouble. And maybe... just maybe... love.

Email ThisBlogThis!Share to TwitterShare to FacebookShare to Pinterest
Labels: A Week to be Wicked, B's Tuesday Review, Blodeuedd, Books and Reviews, Tessa Dare

Oh a bit too bad for this one

For some reason the format got weird. Fixed it now.

I agree, I need some romance in a book like this one.

Mary
I do read romance for the romance