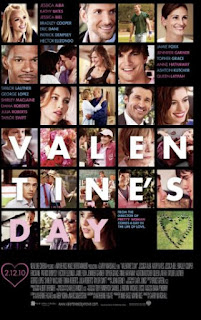 Film Name: Valentine's Day
Length:  2 HR & 5 Mins
Released: 2010
Genre:  Romance, Comedy, Drama
Rating: PG-13
Where I Got It: HBO Max
SUMMARY:
Intertwining couples and singles in Los Angeles break-up and make-up based on the pressures and expectations of Valentine's Day.
REVIEW:
Seen this was leaving HBO Max soon AND it is Love Month, so why not. Plus I love 'Love Actually' and this def is similar.
We are in LA and it is Valentine's Day! Intertwining couples and singles across the city will face the pressures, expectations, and feels.
This was a nice V-Day movie for sure. Make your date watch this. FH came in halfway and watched the rest with me. OF course, I had to explain who was who and what was going in, but he even stayed to watch and this isn't his jam. He didn't LOVE it, but he was like "Not bad."
Funny enough...that is how I felt. Not a bad film. There was humor. There were OMG moments. There were AWWEEEE moments. But in the end...it was just okay. A nice movie for a lazy day in bed or on the couch with your sweetie.
My main issue was that there were TOO many characters. It took too long for some reveals on the who-is-who/connections. I get they wanted a OMG or NO-WAY moment, but I was confused too often. Now I know all of the secrets....I don't mind rewatching or having this on in the background while I do chores or write.
There was ONE secret that had me clapping for joy!! Someone comes out as gay and I was so happy because that was not being represented in the film at all. Kinda mad it took until near the end. I would've loved that to be announced sooner so we could follow the character grow into their truth.
In the end, this is a very sweet film and good for a date, lazy day, or a good movie in the background. Had a couple issues, but overall it was okay!  3 stars. Can never have enough!!

I haven't seen that one. I'll have to give it a watch at some point.