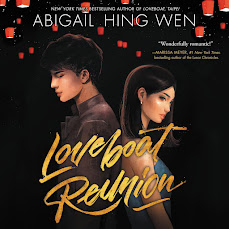 I am glad I managed to forget what happened in book 1, because reading my spoiler and trusting my intuition, I did not like Sophie in the previous book, and I seemed to have wanted Xavier with someone else. And that is why it is awesome starting from a new slate.

Sophie is new too. She has started college, she wants to work hard, she is trying to get into this awesome AI class. But she still loves clothes and everything like that. But hey, you can have both worlds Sophie!  I liked this Sophie, she is trying.

Then there is Xavier. His family thinks he is an idiot just cos he is dyslectic. Shame on them. And he tries his best by avoiding everything.

There is a slow romance building. They start at friends, but they will be more again. But before that there will be a crazy reunion in Taipei, family drama and more.

I liked it, but yes I did like that I listened to this one a year after book 1. The characters are more new then.

Great narration, I always like her voice and she always does a great job. Great listening to

Now fall is here, and it’s time to focus on what really matters. Sophie is determined to be the best student Dartmouth’s ever had. Forget finding the right guy to make her dreams come true—Sophie is going to make her future happen for herself. Xavier, on the other hand, just wants to stay under his overbearing father’s radar, collect his trust fund when he turns eighteen, and concentrate on what makes him happy, for the first time ever.

But the world doesn’t seem to want Sophie and Xavier to succeed. Sophie’s college professor thinks her first major project is “too feminine.” Xavier’s father gives him an ultimatum: finish high school or be cut off from his inheritance.

Then Sophie and Xavier find themselves on a wild, nonstop Loveboat reunion, each trying to resist the chemistry that originally led to them to combust. As they grow closer, they hatch a plan to take control of their own futures. Step one? Break all the rules.

Boo on his family!!!

I haven't read this one but I'm not sure it would be the right one for me.

His das was an asshole, his uncle a d#ck