Blodeuedd's Monday Review: Save a Horse Ride a Viscount 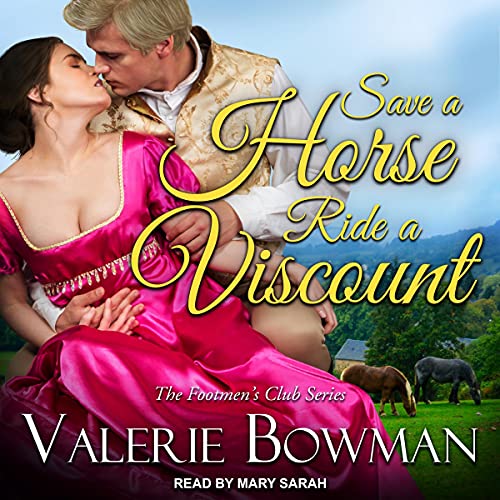 Thea was headstrong for sure, so headstrong she ended up with a broken leg, could not be moved and had to stay with a Viscount *wink wink* Just to see the horse her father sold long ago.

As for Ewan, oh man, you could have stayed out of so much trouble of you had just let her see that horse!

They have to spend some time together, and they talk, and fancy each other. But there has to be some drama, though to be fair, if she had just asked him one question then there had been no drama. So he had to do some chasing, good for you Sir.

There is also a sidestory with his friend who he tries to help, and I do hope that friend gets the next book.

All in all, a fast, sweet story. And a title that will always give me a chuckle.

The narration was good after a for me bumpy road, as she did not have a lot of voices for the characters. But she made it a fast fun read

Ewan Fairchild, Viscount Clayton, has been busy ticking off the boxes for a bright future. Become a rising star in Parliament? Check. Find a lady he intends to marry? Check. Make his stables the envy of every man in London? Check, thanks to the prize Arabian thoroughbred he's just won at auction. Clayton's on his way to having it all and won't change course for anyone - not even the beautiful young woman next door.

Lady Theodora Ballard didn't mind missing a Season of dinner parties, balls, and soirees to care for her ailing mother, but when Thea's father sold her horse out from under her, she thought her heart would break. Now the roguishly handsome viscount at the neighboring estate has her horse - and she'll stop at nothing to get him back. Unfortunately, a horse spying mission goes south, leaving Thea with a broken leg and Clayton with an alluring houseguest who upends his orderly world. The sparks between them are undeniable, but secrets and scandal abound. It's going to take more than a little love to save them....

I love that title!!