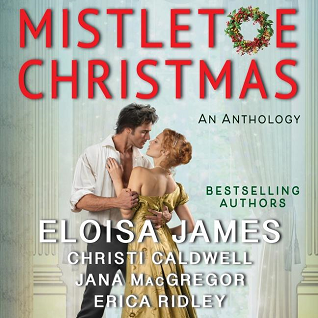 Poor Cressida, her father was such an asshole! Put her down her entire life so she could not see her worth. At least she knows she is awesome at organizing the yearly party (that her asshole father takes credit for). She stays in the shadows, until someone finally notices her. Awww Elias, he saw beyond everything and the both deserved their happiness

Wishing Under the Mistletoe by Christi CaldwellI

get why she left him, he was all about work. Gotta make some money to prove everyone he is worthy..though! I sure would have liked to see how on earth a stableboy ended up engaged to a Duke's granddaughter?!

Anyway a nice second chance romance. They talk it through, they see the light

Compromise Under the Mistletoe by Janna MacGregor

Another second chance romance. Married couple had lots of hawt sex, but never talked (like hello it takes the both of you.) And now they are pretending to be in love, and will obvi finally talk and be happy again.

Lady Louisa is a spinster thanks to gossip columns. Now is her last chance, and she is seen for once, but gives her heart to a poet. And awww, xmas times, they fall for each other and well he does have a bad secret. Grrr

All in all sweet and good stories. It sounds like a fun revelry for sure. And at the end I am left thinking, whose original story is it? When will the viscount find love? He needs love too ;)

Good narrator, since it was 4 stories, I never felt lost, I always knew in which story I was even though some characters walked through them all. Nice distinct voices.

The Duke of Greystoke’s Christmas Revelry is famous throughout the British Isles for its plays, dancing, magical grotto… not to mention scandals leading to the marriage licenses he hands out like confetti. But not everyone welcomes a visit from Cupid.

Lady Cressida, the duke’s daughter, is too busy managing the entertainments—and besides, her own father has called her dowdy. Her cousin, Lady Isabelle Wilkshire, is directing Cinderella and has no interest in marriage. Lady Caroline Whitmore is already (unhappily) married; the fact that she and her estranged husband have to pretend to be together just makes her dread the party all the more.  But not as much as Miss Louisa Harcourt, whose mother bluntly tells her that this is her last chance to escape the horrors of being an old maid.

A house party so large, that mothers lose track of their charges, leads to a delightful, seductive quartet of stories that you will savor for the Season!