Blodeuedd is in red and Carole is in blue. 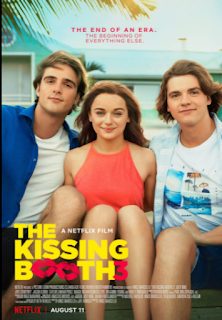 DISCUSSION:
**BE WARNED - THERE ARE SPOILERS! WE COULDN'T HELP OURSELVES HERE hehe**

KB getting a third, then damn it the princess movie can get a 4th, what was it called? I have the flu, my brain is dead

Isn’t this based off a book? So maybe they had a contract that they had to do ALL the books? Oooooo and the Xmas Prince or something another. I love those.

Yes xmas prince! Mooore. And oh, did I know, or did I forget. Checking them now. At least book 2 seem to follow the story, now what about 3. Oh book 3 hasn’t even got a blurb?!

That’s weird...maybe it hasn’t come out yet??? Now that would be strange indeed if the movie came out before the book lol.

The only thing I find that is is the script, ok that makes sense. Anyway, least fav of the 3. The guys were so needy and aholes

Looks like book 3 was JUST released on the 26th………….huh. Weird……...and YES all the guys sucked. Even Lee,her bestie. What babies! Let the girl live her life.

Like yes, Lee was such a baby! Omg, she is doing her best and you are all up in her face. SHEESH, spend some time with your girlfriend instead! And she was being too nice, trying to be nice to them, go where you want to go, if they are being such dicks about it then you do not need them. This one just made me sad, friends should respect each other and not be all boohoo, go to my college.

RIGHT! Like I can understand WHY Lee was worried that their friendship would fall apart. I can get WHY Noah, the BF, would wanna be selfish and have her with him. BUUUUUUUUUUUUUUUUUUUUUUUUUUUUUUUUUUUUUUUT they were such asshats. Isn’t there a number that Lee should be happy for her successes? Shouldn’t Noah want her to be happy and TRUST her? SIGHS. I’m so happy Lee’s GF and Elle did what they wanted in the end and went to school and everyone broke up temporarily. They were all too immature and needed to find themselves. I cheered. Is that wrong of me to cheer? LOL

I guess someone would say, but they are kids! Ehh, I did NOT get that pissy cos no one came to uni with me. Sure you can be sad, but this?! And Noah, tsk, I was mad at him in movie 2 I think, and they are not right for each other. And if I was Lee’s GF I would break up too cos obvi he never spent time with her ;)

Agreed. I have been pissed at Noah since movie 1. Sure he can be a good BF, but I feel like Elle ALWAYS has to tip-toe around his feelings. I like Chloe a lot (Noah’s gal pal), but I still wonder if he kinda like-likes her. And poor Lee’s GF….I woulda dumped Lee a long time ago even though I think Lee is super cute. Way cuter than Noah ;) OOOH and none of my friends went to the same college as me. Some went out of state or hours away. Grow up kids.

I liked the summer house, the list, but yes it felt like there was too much unnecessary drama, and you can’t blame it on them being teens. They are just assholes. Also the ending, yeah not a fan of that. It felt like these movies were for nothing. The ending just felt sad

Shame on the parents for letting 4 teenagers (granted Noah is like 19-20 now) just stay at that house all summer….alone….2 couples….weird. When I was 20 I had to BEG to let my BF spend the night while my parents were home. Sighs. And yesssss there was a lot of unnecessary drama. The ending did feel sad. It made me wonder what the point was. :/

Ha, yes I thought about that too, it’s like no one cared! They just threw lots of parties and everyone was all lalala.

Yup, what was the meaning. I guess we should believe that maybe they fall again? But I did not feel that. I wish it had ended before, no instead of romantic movies it felt a bit depressing. And like she had met  no one else? You can meet other people. That would have made me happy. She with someone deserving, and he with someone. Like oh there you are, we were happy, now we are happy again :)

I kinda wanted Elle and Chloe to end up together. Hehe. F off Noah! ;) But I think they do or will end up together based on them riding their motorcycles together. Maybe the whole point was that they needed to grow up and maybe JUST maybe be mature enough for each other and blahblah.

Omg yes, that look when she left and what she said. They totally should be together. And yes I assumed so too, or it was a flashback, i just do not want them together anymore. Lost love can suck it, all they did was fight.

Chloe was the only logical one and had to remind Noah of stuff. SMH. I want Chloe to find love with Elle or someone. She was a doll. Lee and Noah are big babies and deserve to be alone for a hot min. I even liked Lee’s GF (what is her name? I keep forgetting). She deserved someone that wasn’t a child. Maybe I woulda felt better if we could’ve seen Noah and Lee be adult MEN...not babies.

I can’t remember either, maybe cos she was never there, no one spent time with her. And yes I really liked Chloe in this one, though her whole arc felt weird, only there for drama, as with Elle’s old fling. They missed out when Chloe and Elle didn’t show up at the end, damn, you nailed it.

Yesss. Stupid male babies. Mmmm. I just felt tired at the end. I wish I could’ve liked this more, but it really bummed me out about how childish those men were and how Elle and that other GF just tried to cater to them. Glad they woke up and got all “I AM WOMAN I SHALL DO WHAT I WANT.” Maybe that is the point? You have to make yourself happy first before you can be content in a relationship?

Make yourself happy first, and do what you want. But does it have to be so depressing.

Agreed. I was so sad for Elle. I would’ve pushed Noah off that Hollywood sign LOLLLLL. It was depressing and so SO SO SO SO drama-filled...to the point I was wondering if they even slept or would that hurt someone’s feelings “OH DARE YOU SLEEP!”

On top of that we had to have some oh no my dad found someone else drama. Elle did not need more drama in her life, though that drama at least felt real.

OOOO. Yes. I get that drama. Those hurt feelings. Poor thing.

I could have done without this last one. It was still fun to watch, but….sad

Agreed. They could’ve skipped over this and done a quick summary at the end of movie 2...and have them remeet 6 years later or whatever. This just seemed like an odd filler of the inevitable. Sad. But there was some fun stuff that had me dead of laughter. IE the Mario race ;) *cough* which Noah had to ruin bc jelly *cough*

Ok so I looked again and this seems to have been a novella after book 2, maybe they filled it out with all this drama. Who knows. But I wish they had not

Eeee that would make sense. Sighs. Dang Netflix!!! But yaaaa - I enjoyed it overall and it was fun, but it was too extra and that’s me saying that and I’m usually about that drama and cheese life.

I love all that cheese! Speaking of cheese, did you see what I RT you on twitter? Xmas movie?

MMmmmm I don’t remember. I’ll have to jump on twitter!! *looks* I don’t see it!

Arghhhh, ok it was Brooke Shield goes to Scotland to buy a castle? Grumpy Scot(Cary Elwes) is all no, and they fall in love! Also Princess Switch 3

Hehehehe. We’ll find something. Maybe we’ll do a book? We haven’t done a book in a hot min.

We need to find something interesting!

We shall find something interesting! Yess, the end! I gotta get back to work. SIGHS 1.5 hours left of my day. Feel better!

SO is hoving, after midnight. Gnight!

I decided to skip this one. We googled what happens and realized it wasn't going to be a good movie. The first one was great - it should have been a standalone movie.

I think I'll be content with your chat and the trailer. :)

Ack, why didn't they just stop

Sophia, I do not blame you at all.

B, sighssss because they never stop :/