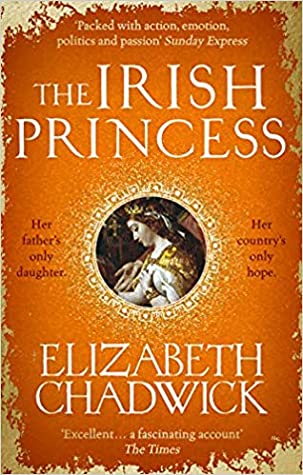 It has been ages since I read my last Chadwick! I wasn't a fan of he E of A books, so I stopped. But then I noticed a new one, and another new one, and I had to try again. I have missed her books, they are always filled with details and she brings out people you would never read about otherwise. And she really loves and excels at the 12th century.

Aoife is a princess of Leinster. And the Irish Kings keep fighting each other, then her family has to flee and end up in England. The choices her father does will doom Ireland, but then again, the English would have come sooner or later. Help us, and you can have some pieces of Ireland. Well thanks for that Diarmait!

To get some English help, Aoife marries Richard de Clare. And it was here I started to know this family, it all came together. Their child would marry William Marshall. Quick fact, Isabel and William will have a bunch of sons who never manages to get any kids (except one daughter). It was said to be a Irish curse, spooky! But their male lines would die out. Ok I got off track, but this is what her books makes me do, google the shit out of everything.

Another winner from her.

Aoife MacMurchada is just 14 years old when her father Diarmit, King of Leinster, is brutally deposed, and her family is forced to flee Southern Ireland into English exile. Diarmit seeks help from King Henry II, an alliance that leads him to the charismatic Richard de Clare, lord of Striguil, a man dissatisfied with his lot and open to new horizons.

Diarmit promises Richard wealth, lands, and Aoife's hand in marriage in return for his aid, but Aoife, has her own thoughts on the matter. She may be a prize, but she is not a pawn and she will play the game to her own advantage.

From the royal halls of scheming kings, to staunch Welsh border fortresses and across storm-tossed seas to the wild green kingdoms of Ireland, The Irish Princess is a sumptuous, journey of ambition and desire, love and loss, heartbreak and survival.

I'm not sure I've already tried one of her books

I should read more by her. I like her. This one sounds good ;)