B's Monday Review: All the Ways We Said Goodbye 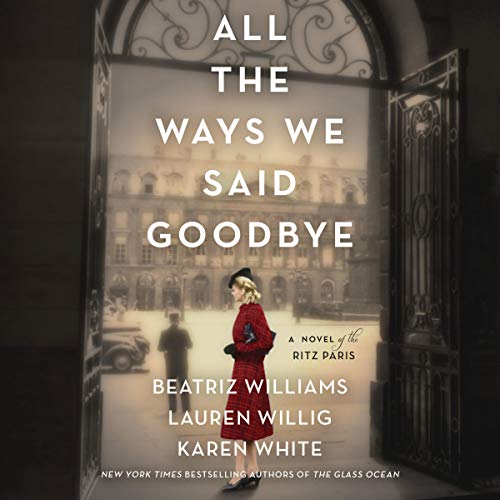 In 1914 there is noblewoman Aurelie, from an illustrious line, that keeps a locket with Jean of Arc's blood as a talisman. I did want more of her story. The German's take over her castle, she falls in love with one as she knew him before the war. Though she is just as much playing him for information. It was just over so fast!

I am not sure who narrated her parts, but I liked it.

In 1942 there is Daisy, who clearly married the wrong man. I wanted more of her rise to a resistance fighter. She was so cowed, and then she was a spy.
There is also a German officer around that was also around in 1914...

Again, I do not know who narrated her either, but whoever it was did a good job with this too,.

And then in the 60s Barb goes to find out what her husband did in France during the war. Her part was fine as brief, cos looking for the past is never as interesting as being in the past. She was a good interlude. But oh Barb, I had a hard time with her. Her husband, on to be, got a letter while recuperating and she never showed it to him! So not cool. But then he could just have gone back too...

Again, whoever narrated did well.

I did like the story as a whole, they are all connected, and it is obvious how. Not one aha moment, but maybe it was meant to be like that.

And yes the earlier stories could have been longer and more fleshed out, but the thing is if they had been then the book would have been too heavy.

I did like that there were 3 distinct narrators too so that every woman got to shine in her own light.

France, 1914. As war breaks out, Aurelie becomes trapped on the wrong side of the front with her father, Comte Sigismund de Courcelles. When the Germans move into their family’s ancestral estate, using it as their headquarters, Aurelie discovers she knows the German Major’s aide de camp, Maximilian Von Sternburg. She and the dashing young officer first met during Aurelie’s debutante days in Paris. Despite their conflicting loyalties, Aurelie and Max’s friendship soon deepens into love, but betrayal will shatter them both, driving Aurelie back to Paris and the Ritz— the home of her estranged American heiress mother, with unexpected consequences.

France, 1942. Raised by her indomitable, free-spirited American grandmother in the glamorous Hotel Ritz, Marguerite “Daisy” Villon remains in Paris with her daughter and husband, a Nazi collaborator, after France falls to Hitler. At first reluctant to put herself and her family at risk to assist her grandmother’s Resistance efforts, Daisy agrees to act as a courier for a skilled English forger known only as Legrand, who creates identity papers for Resistance members and Jewish refugees. But as Daisy is drawn ever deeper into Legrand’s underground network, committing increasingly audacious acts of resistance for the sake of the country—and the man—she holds dear, she uncovers a devastating secret…one that will force her to commit the ultimate betrayal, and to confront at last the shocking circumstances of her own family history..

France, 1964. For Barbara “Babs” Langford, her husband, Kit, was the love of her life. Yet their marriage was haunted by a mysterious woman known only as La Fleur. On Kit’s death, American lawyer Andrew “Drew” Bowdoin appears at her door. Hired to find a Resistance fighter turned traitor known as “La Fleur,” the investigation has led to Kit Langford. Curious to know more about the enigmatic La Fleur, Babs joins Drew in his search, a journey of discovery that that takes them to Paris and the Ritz—and to unexpected places of the heart. . .
Written By Carole Rae at 6:30 PM

I wanna read this!

This sounds really good. I always feel that when a book has split time lines like this that I favor one over the other.

Carole
DO it :D

Mel
They are good ones

SOphie
Same, it is hard to like all equally