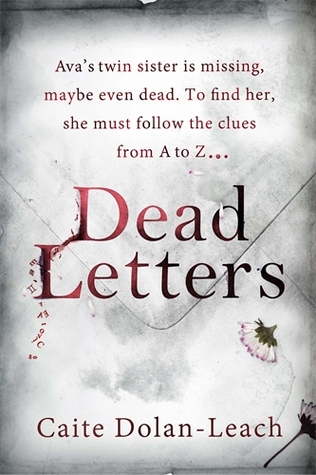 Ava doesn't believe it when the email arrives to say that her twin sister is dead. It's not grief or denial that causes her scepticism - it just feels too perfect to be anything other than Zelda's usual manipulative scheming. And Ava knows her twin.

Two years after she left, vowing never to speak to Zelda again after the ultimate betrayal, Ava must return home to retrace her errant sister's last steps. She soon finds notes that lead her on a twisted scavenger-hunt of her twin's making.

Letter by letter, Ava unearths clues to her sister's disappearance: and unveils harrowing truths of her own. A is for Ava, and Z is for Zelda, but deciphering the letters in-between is not so simple...

My thoughts:
I enjoyed the mystery in this one, it did make it hard to out it down.

Sure, the characters all had issues, but why would I mind that. They were all alcoholics even if Ava was in denial. I like unreliable narrators.

Ava comes back to her parent's vineyard after her sister has died...or has she? She keeps getting these emails and I could honestly not tell, was Zelda really dead? Was she hiding? Was this revenge or some sort of effed up way of messing with the sister that left? I needed to know.
'
The book is about Ava finding clues and trying to figure out what is going on. All while dealing with their messy vineyard, her mother and the betrayal that made her leave in the first place. And I did like Ava, though she should stay away from the booze and pills. A vineyard was so not the best place for them to grow up with a mum like that.

And Zelda was a piece of work, she was a mess. The flashbacks of them growing up shows her calculating side.

Conclusion:
The book was a fast read and it kept me wondering what was really going on. Oh I had some insane theories to be sure ;)

it is always nice to have a good mystery