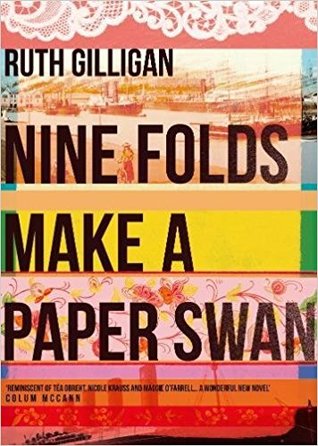 At the start of the twentieth century, a young girl and her family emigrate from Lithuania in search of a better life in America, only to land on the Emerald Isle instead. In 1958, a mute Jewish boy locked away in a mental institution outside of Dublin forms an unlikely friendship with a man consumed by the story of the love he lost nearly two decades earlier. And in present-day London, an Irish journalist is forced to confront her conflicting notions of identity and family when her Jewish boyfriend asks her to make a true leap of faith. These three arcs, which span generations and intertwine in revelatory ways, come together to tell the haunting story of Ireland’s all-but-forgotten Jewish community. Ruth Gilligan’s beautiful and heartbreaking Nine Folds Make a Paper Swan explores the question of just how far we will go to understand who we really are, and to feel at home in the world.

My thoughts:
There are 3 POVs in this book. Ruth's family was on their way to America, escaping Lithuania, but ended up in Ireland. She grows up there, makes a life there. I would have wished more of her story, Ireland changing and all that, instead it moved pretty past and we got tidbits here and there.

The second POV was my least fav, a boy in a mental institution, he has stopped talking and well, he just there.

The third POV was my favorite. Ashling loves her boyfriend but he wants to marry a Jewish girl, and she is wondering if she should convert.

But honestly, I wish the book had been longer, or one narrator could have been skipped so the other stories could have gotten more time. I wanted more flesh on the bones. I wanted to get to know them more. It made it confusing at time too when a new chapter started, but whose was it? Someone just started talking. It could have done with some header or something.

Why am I thinking of Joyce now...it was not like that, but they all did think a lot. We did not really see things around them. Things that were happening, it really was a character novel instead and we were in their heads.

It looks nice in a whole even if you wanted more

Pity not all POVs were up your scratch.

Writing multiple POVs can be rough.