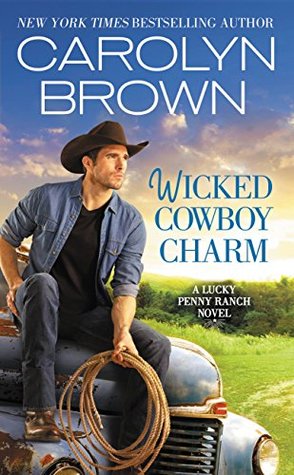 Josie Dawson is new in town, but it doesn't take a local to know that Deke Sullivan is trouble--in a smokin' hot package. He's sweet, sexy, and has charmed just about every woman in Dry Creek, Texas. Well, Josie won't be next. She'll keep her distance, even if he is great with babies and makes a mean cup of homemade hot chocolate.
Deke Sullivan really is a one-woman type of guy. He just had to do a lot of looking to find that one woman. Now he thinks he's found her and he won't let a strong, sassy gal like Josie slip away. Just when he's wondering how to convince her he only has eyes for her, they get stranded in a tiny cabin during a major blizzard. If Deke can melt her heart before they dig out of the snow, he'll be the luckiest cowboy in Texas . . .

My thoughts:
I have said it before, and I will say it again. I like Brown's books because they are sweet. There is always good banter going on and it makes me want to visit where they are and have some pie or something.

In this one, Deke meets Josie. She is staying with her brother, she has plans, and they do not include a wild cowboy who flirts around. But destiny does have a way of making own plans. Like having them stranded in a snowstorm, just the two of them, well and a dog and an old man. For days. I did like how they got to know each other. They still fought that attraction, but ha, you can try it, but you will fail.

You could see they would fit well together, they just had to get there in their heads first. But it made for an interesting journey, even if the first half was being crammed together in a bunkhouse.

Conclusion:
As always then, a sweet romance with a good couple, and a great side characters.

I love a good dumb cowboy