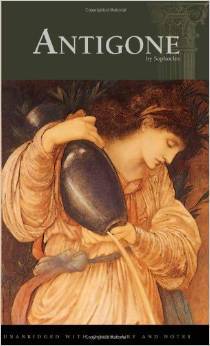 Author: Sophocles
Title: Antigone (The Theban Plays #3)
Genre: Fantasy, Classic, Drama, & Play
Pages: ebook
First Published: 441 BC
Where I Got It: My Shelf (Bought a copy at B&N)


The daughter of Oedipus and Jocasta, Antigone is an unconventional heroine who pits her beliefs against the King of Thebes in a bloody test of wills that leaves few unharmed. Emotions fly as she challenges the king for the right to bury her own brother. Determined but doomed, Antigone shows her inner strength throughout the play.

Antigone raises issues of law and morality that are just as relevant today as they were more than two thousand years ago.

This is the third part of the Oedipus trilogy. However, Oedipus is dead and now leaves his curse upon all his children. His sons' are fighting each other over the throne which causes both of them to die. Antigone and her sister are left to carry the curse now and deal with. The new King refuses to let them bury the dead. So in perfect tragedy fashion, Antigone says FU and does it anyways, which signs her own death warrant.

This, honestly, was the best of the three plays. I liked Antigone and her loyalty to her cursed family is beautiful. She loves her dad and mom even though they cursed them.

I felt bad for Antigone's fiance, because he is in a difficult position. He loves his father (which is the new King) and Antigone defied his father. Poor guy.

The new King is an idiot. SMH! FOOL! He deserves the curse that was given to him in the end.

I feel this story was a huge influence over Shakespeare and his works. This felt very Shakespearean even though it come out centuries before Shakespeare was even alive. I'm not sure if good ol' Billy was influence by Sophocles works, but after reading this, I felt like maybe he was.

This play brings up lots of moral and ethical questions. Which I love when stories make me think!

My only complaint is the chorus parts. Like...I still don't understand who/what they are suppose to represent? Are they ghosts? Or just spectators who happen to be in the room? They don't really do anything to help move the story along in my opinion.

In the end, this was the best of the three plays, in my opinion. It had a lot going on, but it was done in a way where its easy to know who's who and whats going on. I loved the brief romance and I loved the aspect that this really makes you think. In the end, I will stamp it with 4 stars.

But a play is just sooooo

Ah it's been a while since I have read this one

Antigone is definitely one of the best plays of Sophocles. It shows clearly that (among other things) if any king/prince/president orders people to do something intrinsically wrong he or she will reap unhappiness and misery. Leaving your dead unburied was one of major crimes for ancient Greeks. Antigone, being a decent Greek girl simply couldn't leave the bodies of her brothers to rot. She died but, by doing so, she also kind of neutralized the horrible curse hanging over her family. For the Greeks it meant far more than being an obedient citizen and subject.

Melliane, first time for me.

Ana, yes it really does such good messages and warnings. :)