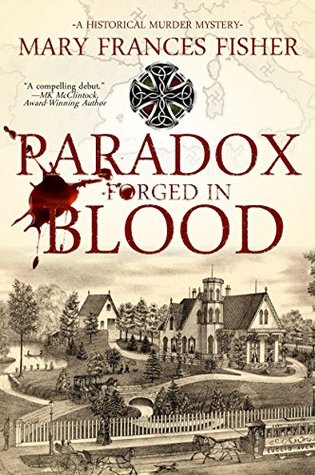 Author: Mary Frances Fisher
Title: Paradox Forged in Blood
Genre: Historical Fiction and Mystery
Pages: ebook
First Published: August 24th 2016
Where I Got It: My Shelf (Given to me by the author/publisher for my honest and unbiased opinion.)


A murder on Millionaire’s Row.
A killer's chilling words, "Shh. I know where you live.”
A woman tormented by her guilt-ridden past.

A historical murder mystery, Paradox Forged in Blood is set in Cleveland, Ohio, during the late 1930s. Four decades after the murder of socialite Louis Sheridan, the cold case is resurrected with receipt of new evidence that transports detectives back to Nazi Germany. The only living witness, Ellen O’Malley, must confront a haunting secret and her complicit actions.


I legitimately finished this in two sittings. It was addicting. Not only was there the main murder mystery, but there were so many other mysteries at play.

There were lots of stories and lots of characters at play. Sometimes it was confusing to remember who was who and who's story we were on. Lots of jumping around, but the author did a decent job keeping the reader on track. Everyone was connected in some way and seemed realistic. It was pretty cool how the author intertwined everyone.

A part of me wished that the story stayed focused on Ellen's and maybe Frank's POV, but the story wouldn't have had all all the extra mysteries and story-lines involved. I did really like Sadie. However, there were some slow parts that could have been cut in order to keep the plot moving along. It sucks having to cut things, but sometimes its needed. It didn't hurt the story for me, because I LOVE people stories, but from a writing stand-point the plot was staled at some points.

Now...the main mystery was the murder mystery. This was a headache to solve, but I pretty much guessed who it was, but I didn't realize WHO the murderer was....hard to explain, but the twist about the murderer was a shock. I didn't see it coming!! I had a different theory, but I knew it was a stretch.

The mystery of baby Patrick frustrated me too and I had no idea.

The mystery of Sadie's twin seemed an easy one, but the author got me there.

The robbery mystery tied in nicely and it was who I thought it was going to be.

Was that all of them?  I can't remember now, but there was a lot going on at times, but the ending tied up everything nicely and I feel all the loose ends were knotted well. I'm glad the author revisited everything to make sure everything was nicely tied up. I hate loose ends!

In the end, this was a fun book. Lots of stories and lots of mysteries. Time does have a weird way of bringing out the truth and revealing mysteries. It may take decades or longer, but someday the truth will be dug up. There will some hiccups in the pace of the story, but overall I really did like this. I highly recommend it for people looking for a good people story and mystery novel. Out of five stars, I will stamp it with three.