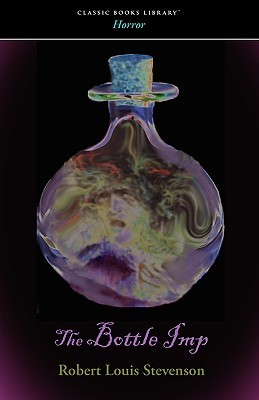 Author: Robert Louis Stevenson
Title: The Bottle Imp
Genre: Classics, Short Story, Fiction and Horror
Pages: 56
First Published: 1891
Where I Got It: My Shelf (Been on my shelf so long - its collected dust...I can't remember)


Offering an engrossing spin on a time-honored theme--the risky business of making a pact with the devil--this short story is a radiant jewel. It recounts the mercurial lot of Keawe, a Hawaiian who purchases a bottle inhabited by an imp capable of granting any wish. Yet this enticing object holds a dark curse: anyone who dies with it in his possession will burn forever in hell. And here's the rub: one can sell the bottle only for less than its purchase price. Keawe rids himself of the bottle after acquiring a palatial home. But when he needs it again to ensure his happiness with a newfound love, its cost is, chillingly, one cent, and the responsibility of ownership becomes a good deal more complex.


Is it too early to start reading horror-type books? I mean...it is technically September now, so we should be good right? Haha.

Anyways, I have a few stories from this author that I have been meaning to read for eons. I have a collection of a few of his short stories and a novel. All my life I heard he was good, so I was meaning to start reading his stuff.

Okay. This wasn't too scary as we know it today. No blood, no guts, or anything like that. This was more of a psychological horror, because we all know we would justify purchasing that damn bottle. This bottle can grant wishes, but at a deadly cost. If you do not sell the bottle for cheaper than what you paid for before you die, your soul goes STRAIGHT to Hell for all eternity. So buying this bottle is pretty much a gamble with the devil. Which is an amazing concept of the age-old "selling your soul to the devil" theme.

I would like to sit on a high horse and say I wouldn't....but I have never faced the situation, so I honestly don't know. Humans are weak and we are greedy, greedy little brats. We have a tendency to not care of others...only our own selfish needs.

Now, Keawe embodies this. He had needs and wants and when presented with this powerful bottle, he took it TWICE. Yes! The fool couldn't help himself TWICE! >_> Idiot. But greed is a powerful thing.

The story and journey was entertaining for sure! I was creeped out and the thing inside the bottle horrified me a touch.

This was almost, ALMOST a five star story, but the ending was a TOTAL FAILURE! So freakin' lame. The author totally blew it and took the cheaters way out. I totally called it, but I was hoping it wouldn't happen. Honestly? It ruined the whole short story. It took away all the horror aspect of it. Sure, the bottle lives on and whatnot, but still.....lame.

90% of it was awesome, but the last bit was totally a failure. I'm rather upset with the author on this. SO LAME! However, I do find myself interested to read the others. Hopefully, they are better. Out of five stars, I stamp this with...mmmmmm....3 stars.

From 5 to 3 at the end is not good, that ending must have sucked