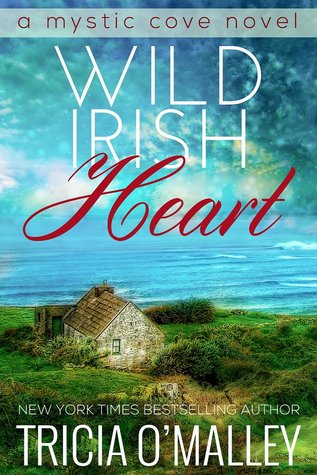 An ancient book, a power untouched, and a heart unloved lead Keelin O'Brien from her graduate studies in Boston to a small village on the coast of Southern Ireland. Determined to unearth the secrets lying hidden in the enchanted waters of the cove, Keelin has little time for a surly Irishman who infuriates her during the day and haunts her fantasies at night.

Inexplicably drawn to the woman who has stepped from his dreams and into his world, Flynn fights a stubborn battle against his increasing attraction for Keelin. Forces unknown have better plans for the two.

Only the secrets of the cove can show Keelin who she really is, the beauty of her mysterious power, and a love that will break the bounds of what she knows.

Been a while since I was so invested in a book. It feels really good. I could hardly put this book down. It caused a lot of emotion and I am dying to continue on with the series. Such an odd feeling….I’ve missed it.

Well, Miss Keelin has some unexplained powers and she has felt like a freak her whole life. One day, she receives a strange book and a letter from her grandmother she never knew. Dear old Mom has been keeping many secrets from Keelin. Yes, she had reason. Was it right to keep all these secrets and make your daughter feel like a freak, not have any contact with her dad or grandma? NO. GAH. I wanted to kick dear old Mom.

Anyways….dear old Mom tells her the truth about and begs her not to go back to Ireland, but she understands if she has to. So Keelin does go back to Ireland to meet Grandma and learn about her powers. Along the way she meets a hottie, who is kind of a jerk, but she can’t stop thinking about.

I’m so glad that the romance aspect of the story didn’t completely take over the story like it does in many other books. The romance was nice, but I’m glad this was also a story about Keelin learning about herself, her family, and her powers. It was nice and it made me happy. However…I wish that the book played a bigger part in her training and the story. The book sent to her was mentioned a couple of times and then forgotten. I wanted to know more of what was in that book!!!!!

SO many secrets her mom kept from her. I can’t disclose ALL the secrets, but there were so many. And Keelin was angry, yes, but did she confront her mom? NO. WHAT? WHY? GAH. I would be POed! I can see her mom wanting to protect her and whatnot, but seriously? So dumb.

I loved the whole backstory of the cove and the reasons why Keelin and others have powers. It was pretty unique and I want to read more. I adored Cait and I can’t wait to read her story. I think it is next. Hmmmm.


In the end, this book evoked a lot of feelings and I was utterly hooked. There is romance mixed in, but I was happy that it wasn’t insta-love and it take over the story. I highly recommend it if you are looking for something quick and sweet. Now the rating? Ummmmm I shall stamp it with 5.

I should be writing that story....

Sounds so good and I am glad it made you truly engaged!

Thanks! I haven't felt so engaged in a book in a while. :)