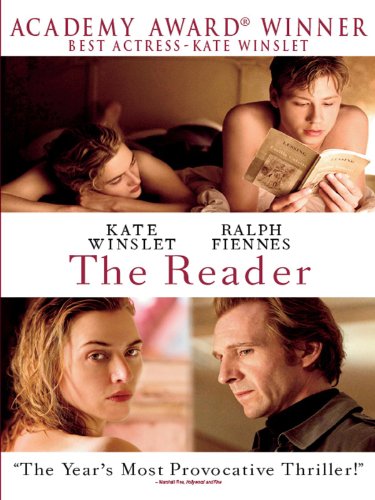 SUMMARY:
Nearly a decade after his affair with an older woman came to a mysterious end, law student Michael Berg re-encounters his former lover as she defends herself in a war-crime trial.

Book club read the book a while back and we even watched the movie – which I was worried about. I’ve heard such mixed reviews on the movie, so this caused me to be concerned, because I really liked the book.

The cast was decent. I do like Kate Winslet, but I wasn’t a fan of her as Hanna. The German accent horrid at the beginning. It seemed to get better or I become accustomed to her over-the-top German accent. Also, I feel they should’ve gotten a different lady to play super old Hanna, because the makeup was horrid. She only was supposed to be 20 years older, but she looked WAY WAY older then she was supposed to be. Everyone else did well. The boy who played Michael did wonderful job and he was pretty close to what I imagined.

They stuck pretty close to the book – few liberties were taken and I must applaud that.

My other big complaint with the film was the lack of feeling. It didn’t hold the same feeling as the book. It’s really hard to explain, but I watched with minimum interest. I try not to judge the film off the book, but I couldn't help it with this one. Maybe it didn’t help that I was surrounded by others who felt the same, so we tended to get distracted and not pay attention to the movie.

Overall, this was barely decent. The book was WAY better than the film. If you want to watch this movie, I encourage reading the book first. The role of Hanna was not portrayed with the right actress, make-up was horrid, and it lacked the same feeling as the book. It was better than I expected, but barely. Out of five stars, I stamp this with 2.

Still have not seen it, might never do it

I wouldn't blame you if you didn't LOL

I think I did see this one but I can't remember what my feeling was... One thing is for sure I saw it in French because I don't watch a lot of movies in English so I suremy didn't have the same problem about the accent

I watched this one and I agree with your assessment completely - it lacked feelings.

Melliane, watch the English version...you will understand my pain. LOL