This month Blodeuedd and I will be discussing "Katrina, The Beginning" by Karen Kincy. 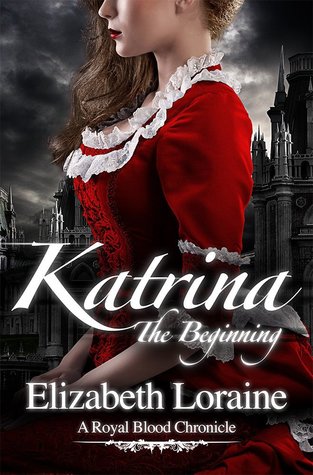 As a Vampire being hunted was nothing new. Finding out that I had to save those that were hunting us was!


Katrina is thrust into something she never could have imagined growing up in the aristocracy of Europe. Once the fashion of the day, and girlish gossip filled Katrina and her new friends days, but their lives changed the instant their race was threatened and they were chosen as the Five, and the protectors of not only the vampire race, but all the peaceful races of the world!

B: Yay happy Day after Xmas. May I first start with my tale of my reading of Katrina? The let me begin. I read 70 pages in 1,5 weeks. The over xmas I tried my best and read 30 more, then you said you had finished it and I tried again, but omg!!!! I had to skim cos I was all blerghhhhhhhhhhh.

C: Oh my. Yeah...it  took me a week to “finish” it. I literally forced myself to get through it last night. Lots, lots, and LOTS of skimming

C: Ugh. I felt like it was written by an 11 year old. My breaking point was the dialogue….its suppose to be historical, but I felt like it modern day. What really killed me was Katrina’s sister was named Katherine….like really?

B: Yes!!! They have the SAME NAME. What was the parents thinking?!

C: Right!? I really liked the concept of the story, but dang the delivery killed my soul a little bit.

B: I did skim a lot so I might have missed something. But the worldbuilding! Why are there vamps around? Why do they have human guards? What on earth is their world like? I got nothing. I only got that she is young, met new friends, and then at the end made some stupid jokes about their hair when people were dying. So crap world. But the writing was crap too, and the dialogue truly horrendous.

C: It was explained why they have/need watchers….but it was lame. There were so many plot holes and things that didn’t make sense.

B: Might have read that and filed it under too lame and forgotten it ;) But yes, I am so glad you did not like it too. I was all gods this suck so much, I sure hope Carole does not like it.

C: hahahaha I guess it was my turn to have a lammmmmmme book. >_< Luckily it was an amazon freebie. I’m so bummed.

B: Lol. But yes, I have nothing good to say AT ALL. I certainly did not like Katrina, nick Kat, or her sister Katherine, nick Kate. Or anyone at all. Oh oh oh, not to mention the whole I LOVE my human guard, but wait, look at that sexy vamp. Sure, you wanted a triangle, and you made one.

C: Yeah…..I hated the triangle. It literally lasted like two pages and then both Katrina and Quinn realized, “Oh...it was blood lust...so we can be friends again.” WHAT? Really!? You can’t just be “in love” and get over it that quickly. Don’t care if it was “blood lust”....there should be more recovery from that! Bleh.

B: My last line would be: Do not read this one. But if you do like cliché YA vamp stuff that is written  by a teenage girl who thinks she is the heroine then sure why not, read this. But I sure do not recommend it.

C: Same….there really was no redeeming thing….it was a high let down. :/ The end?

B: The end. I just want to leave this mess behind me.

C: I’m sorry I picked a hot mess of a novel. LOL

B: I am scared now. But I do want to read Moyes for January, but I am scared it will suck

B: Let there be hope.

**Carole's Conclusion**
Oooooh I am so sad by this one. Yes, it was an Amazon freebie, so I shouldn't have had my expectations so high, but this failed. Utterly failed. The concept was intriguing and fun, but the writing was badly done. It's suppose to be set in the past during the times Europe discovered the new world, but the dialogue was so modern. There were so many plot-holes I felt so lost half of the time. Super, duper bummer. I do not recommend it. Out of five stars, I stamp this with 1 star.

No idea....it was never really pointed out, so I am left confused.