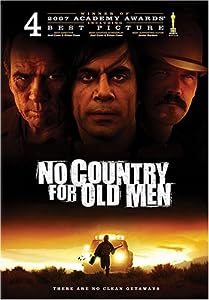 SUMMARY:
When a Vietnam veteran discovers two million dollars while wandering through the aftermath of a Texas drug deal gone horribly awry, his decision to abscond with the cash sets off a violent chain reaction in a stripped-down crime drama from Joel and Ethan Coen. Llewelyn Moss has just stumbled into the find of a lifetime. Upon discovering a bullet-strewn pickup truck surrounded by the corpses of dead bodyguards, Moss uncovers two million dollars in cash and a substantial load of heroin stashed in the back of the vehicle. Later, as an enigmatic killer who determines the fate of his victims with the flip of a coin sets out in pursuit of Moss, the disillusioned Sheriff Bell struggles to contain the rapidly escalating violence that seems to be consuming his once-peaceful Lone Star State town.

REVIEW:
Second time I've sat down with this movie. The first time I fell asleep, but that was in 2007. So its been a nice while since my last attempt and boyfriend wanted to watch it, so might as well.

Again...the acting was fabulous. The baddie was scary and of course I loved Tommy Lee Jones.

However, there were so many slow parts that seemed too slow for an action movie. I wish there had been fight scenes between the baddie and the guy who found the money. There were many intense moments and even though I knew what was going to happen, I was still worried for the main guy, the cop, and the main guy's wife. I get that the money belonged to the baddie, but what a psycho. Honestly, its only 2 million dollars...I would've left it after I knew the crazy, murderer was after me. But what do I know, I guess.

Oooh the ending. The biggest flaw to me. I still am unsure of what happened. There were so many loose ends and it was kinda cliffhanger-ish. Not a fan. Maybe if they made a second one then I'd be content, but its been YEARS since it came out.

In the end, this was an okay movie. Maybe more of a guy movie honestly. There were a lot of slow parts and I excepted more action or dialogue. The ending had lots of loose ends and I'm still not sure what happened to a couple of the characters. The acting on all ends, though, was fantastic.

I gave up on it