Blodeuedd Reviews: What Happens Under the Mistletoe 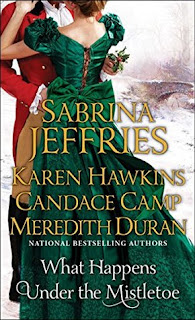 Blurb:
Stunned by the heat of an unexpected kiss on a cold winter’s eve, two strangers from vastly different worlds turn hotheaded principles into burning passion in Sabrina Jeffries’s delightful yuletide story, The Heiress and the Hothead. In the snowy Scottish countryside, Karen Hawkins’s rakish duke has an unforgettable holiday encounter in Twelve Kisses when the alluring lady he surprises under the mistletoe is not who he expected, but a long-lost love with a score to settle. In By Any Other Name, Edinburgh is aglitter for Christmastime as Candace Camp sends a curious gentleman in hot pursuit of an intriguing lady in disguise—one who refuses to reveal her true identity, though she fears he has already stolen her heart with his kiss. In Sweet Ruin, will the festive spirit of the season sweep Meredith Duran’s feisty heroine beneath the mistletoe—and back into the arms of the dashing rogue whose carelessness soiled her reputation and sent her into exile in London?


My thoughts:
The heiress and the hothead by Sabrina Jeffries
Lord Stephen writes angry news articles about mills. Amanda owns mills. The whole mill thing was not exactly romantic (only North and South can do that.) But they will dance around each other and fall in love.
But that smexy scene, seriously. No, not then and there. Ugh.


Twelve kisses to midnight by Karen Hawkins
I have a problem. I forget short stories SO FAST. Luckily I had written lovers trapped by snow cos I can hardly remembering that the story ended. Just general feelings now by those words.
So yes former lovers meet, are trapped, and realises they still like each other. I'd read more of her books.


Sweetest regret by Meredith Duran
I liked this one. A couple that used to be in love meet again. They are angry. Something went wrong. Everything happens during a house party. Def the best of the novellas in this anthology. A nice holiday feeling too.


An anthology where I actually liked all the stories ;) Yes that does not happen a lot. But to be fair there were only 4, and I do like holiday novellas so that helped. They were cute and nice stories.


NetGalley
Written By Carole Rae at 9:09 AM