Blodeuedd Reviews: Me and Mr Darcy by Alexandra Potter 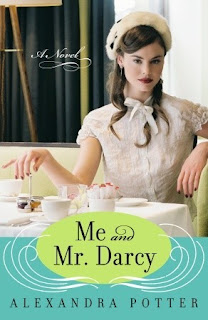 Blurb:
After a string of disastrous dates, Emily Albright decides she’s had it with modern-day love and would much rather curl up with Pride and Prejudice and spend her time with Mr. Darcy, the dashing, honorable, and passionate hero of Jane Austen’s classic. So when her best friend suggests a wild week of margaritas and men in Mexico with the girls, Emily abruptly flees to England on a guided tour of Jane Austen country instead. Far from inspiring romance, the company aboard the bus consists of a gaggle of little old ladies and one single man, Spike Hargreaves, a foul-tempered journalist writing an article on why the fictional Mr. Darcy has earned the title of Man Most Women Would Love to Date.
The last thing Emily expects to find on her excursion is a broodingly handsome man striding across a field, his damp shirt clinging to his chest. But that’s exactly what happens when she comes face-to-face with none other than Mr. Darcy himself. Suddenly, every woman’s fantasy becomes one woman’s reality. . . .


My thoughts:
I am torn. It was good at times, but at other times it was only ok. Hmmm. Maybe I will go with ok.
Emily loves the classics, and Austen. She goes on a Tour. Suddenly the book gets all paranormal cos there are timeslips and she sees Mr Darcy. I could so not see him fall for her, nope. Not like she acted. But oh well. If he had been called something else, if his friends had been called something else. Then it would have worked better for me.

Right. She befriends the other women in the tour, some have problems. There is this irritating man (that is still cute).

So it was ok, bordering on good. But the time slips kind of ruined it for me.

Mmmm not sure how I feel.

I was all...that is not right, I am a purist

too bad it wasn't all good

Not for me, thank you very much :)