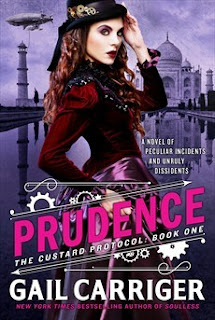 Blurb:
When Prudence Alessandra Maccon Akeldama (Rue to her friends) is given an unexpected dirigible, she does what any sensible female would under similar circumstances - names it the Spotted Crumpet and floats to India in pursuit of the perfect cup of tea.
But India has more than just tea on offer. Rue stumbles upon a plot involving local dissidents, a kidnapped brigadier's wife, and some awfully familiar Scottish werewolves. Faced with a dire crisis and an embarrassing lack of bloomers, what else is a young lady of good breeding to do but turn metanatural and find out everyone's secrets, even thousand-year-old fuzzy ones?

My thoughts:
I was thinking of giving this one an ok rating, but, did I think it as ok? Did I like a single thing about it?
Not really.
Every single character was an idiot. So freaking annoying. I would not want to be friends with any of them. I would not even want to be in the room with any of them. I did meet 3 previous characters, but even they had changed.
The book tried WAY too hard. WAAAAAAY! No, that is not funny. No, that is not cute. That is pushing it beyond. It was trying. It was exhausting to read.
There was no plot. Suddenly there was one. And I was all, this makes no sense. I do not like this. I would have DNFed if I had not loved Soulless, but even that series turned sour at the end.
I do not recommend this.

I was curious about this one but I confess that the mixed reviews won.

Now I am in serious trouble. I WANTED to buy, read and like this one. I liked the Parasol Protectorate series. What a bummer. :(