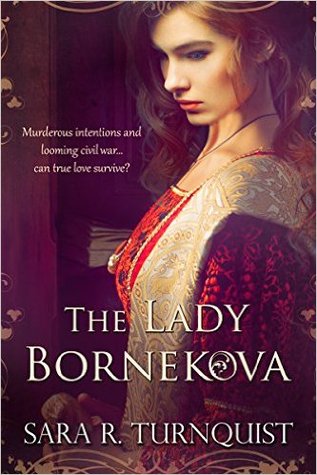 Author: Sara R. Turnquist
Title: The Lady Bornekova
Genre: Historical Fiction & Romance
Pages: ebook
First Published: July 15th, 2015
Where I Got It: My shelf (give to me by the author/publisher for my honest and unbiased opinion)

The red-headed Karin is strong-willed and determined, something she inherited from her father. She tries to keep her true nature a secret to avoid being deemed a traitor by those loyal to the king. Karin and her father butt heads over her duty to her family and the Czech Crown. She is then sequestered to the Royal Viscount’s hunting lodge.

Not aware of everything that is happening, she becomes the target of an individual with murderous intent. Her heart soon becomes entangled though her father intends to wed her to another. The turmoil inside Karin deepens and reflects the turmoil of her homeland, on the brink of the Hussite Wars

I'll be honest I do not know much about the history of Czech, especially during the Hussite Wars. I have heard of it, but my knowledge was limited. That is one of the main reasons I wanted to read this! A new location and an interesting part of history. This takes place shortly before the Hussite Wars. Many people are tearing themselves away from the Roman Catholic influence over the government and following the teaching of Jan Hus. Karin is one of these followers. However, it is quite dangerous to be noble and believe these thoughts. To protect her, her parents have taken her to exile to the Royal Viscount's hunting lodge and away from society. Honestly....I would not complain about that exile. Could be a lot worse....like a nunnery. ;) Maybe they should have done that instead.

Poor Karin. She had a lot of issues throughout the book with getting hurt and almost dying. Unlucky, I say. Also, she falls in love with someone, but she is meat to marry another. Truly unlucky and I felt bad. Plus, she is pretty much in "prison" at the lodge and is being watched and tattled on by her poor maid. I felt bad for the maid in a way too.

I wanted to kick Stepan, but he did make the story more interesting.

I'll be honest...the few chapters bored me. It was so slow and nothing was really happening or being revealed. BUT after a certain event transpired things turned around quickly and I could hardly put the book down! I had to find out how everything was going to end. This is not a historical romance, so the love between Karin and Pavel was a hard one to obtain. Again, tis not a HR, so I will not spoil if they end up together or not. However, I was worried and scared for them!

Also...I'll be honest...I did not like Pavel to begin with. Same with Karin's parents. They upset me, but they proved themselves and I liked all three near the end.

UGH the ending. It was a cliffhanger, but not really. It was an odd ending. I liked it, but it bummed me out that it left so cliffhanger-ish. I hope there is a sequel or a short story, because I NEED TO KNOW. But yes....mixed feelings, but it was good and made me happy, but there were so many questions and not a solid conclusion to Karin's tale. It needs a short story or something.

In the end, I liked it. I needed a nice historical fiction set in a location I've never read before. Also, it was interesting to learning more about a war and a situation I have limited knowledge on. Of course I googled the war and learned more. Can't help myself. ;) The beginning was a little slow and the ending I had a love-hate relationship with. However, the story was good and I was entertained! I need to know more! I highly recommend this for those that love historical fiction with a touch of romance involved. Out of 5 stars, I stamp this with 3.

Czechoslovakia existed from October 1918, when it declared its independence from the Austro-Hungarian Empire, until its peaceful dissolution into the Czech Republic and Slovakia on 1 January 1993. During the Hussite Wars is was the kingdom of Czech.

Ah that was my own dumbness. LOL. I know little about that country. You are so wise. ;)

Nah, not wise, merely living close by. The Czechs are my southern neighbours and btw their kingdom was also known as Bohemia. The nerdy lesson over ;p.

Eh, who can remember every European country :)