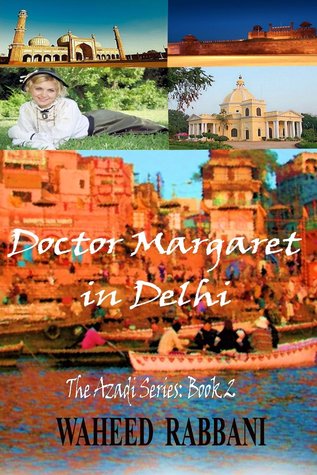 Author: Waheed Rabbani
Title: Doctor Margaret in Delhi (The Azadi Series #2)
Genre: Historical Fiction
Pages: ebook
First Published: May 5th, 2015
Where I Got It: My shelf (give to me by the author/publisher for my honest and unbiased opinion)

This historical fiction novel continues with Margaret's journey from the time she and her Canadian husband participated in the 1854 Crimean War.

Doctor Margaret travels alone to India to be with her parents at the American Presbyterian Mission at Futtehgurh, and then on to her posting at a hospital in Delhi. There she has to not only overcome work pressures, but also deal with her intimidators and intrigues of the Mughals, at the Delhi Red Fort.

Margaret's tormentor since her childhood, Captain Albert, also joins a British regiment bound for service in India. The Russian, Captain Count Nicholai, whom Margaret had met in Crimea, also arrives in India under the guise of a French physician.

The events leading up to the Indian Mutiny/Rebellion that breaks out in 1857 profoundly affect not only Margaret's life, but also of those who love her and others’ who wish her harm.

Also, mixed-up in the bedlam is one of the King of Delhi, Shah Zafar, Red Fort’s Guard’s sepoy, Sharif Khan Bhadur, the grandfather of Doctor Wallidad, an American doctor.

The Azadi Series covers the exciting events and turmoil that inflamed India from 1857 to 1947, and led to her independence. Those incidences engulf the characters of this story at that time, and then later their descendant's lives, again in the 1960s.

This was a really good historical fiction. The first two chapter were a little dry, but once the drama began I was hooked. I got this done in one sitting pretty much. It was good and a quick read. However, it did have that old feeling of writing to it, which I liked immensely. It felt real and written in that era, so I approve.

Speaking of which, the writing style was beautifully done. The descriptions of the area brought India to life!

I am bummed that it was left on a cliffhanger, but I am curious to see what is coming up next for Margaret! I have hope for her, but I know some bad times are coming up for not only her, but for India itself. I worry, but I am curious to see how everything ties together and what is coming next! But yes...the ending was good, but it was a cliffhanger and those make me twitch!

Poor Margaret...especially near the end. :/ I really liked her, but I felt really bad for her. No matter what she did something would go wrong and she was screwed over. Especially at the end. I hope everything works out for her in the next book!

In the end, this was a pretty good historical fiction. I do want to read the first book and the next one! It does well as a stand alone, but it will make you want to read the next one in the series. I liked Margaret, but I did feel bad for her and I hope she gets a HEA. It doesn't seem so, but I am hopeful. The writing style was beautiful and it truly made the story come to life. It was a quick read, so I recommend this to those that need a quick historical fiction fix! So, I shall stamp this with...4 stars.

Thanks Carole, for hosting my tour, and the wonderful review.

Carole, Thanks for the wonderful review. Sincerely, Waheed