Book Review: A Bit of Bite by Cynthia Eden 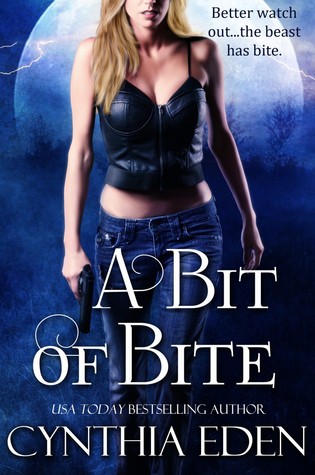 "A killer is stalking the streets of Crossroads, Mississippi, and it’s up to Sheriff Ava Dushaine to stop him. But when suspicion falls on werewolf alpha Julian Kasey—Ava’s ex-lover and the man who still haunts her dreams—Ava knows that she’ll either have to prove his innocence…or watch the whole town go up in flames.
Originally part of an Entangled anthology."

This is a short story that is well...short. One must take that into account.

I need a nice quick adventure with a quick romance. Well, Ava and Julian had a one night stand a while back, but Julian couldn't let go. Ava likes him a lot, but she is head of the police department that deals with the supernatural, so its a wee bit awkward to be dating the head of the werewolf pack.

There is a twist and I liked it, because I didn't expect it and it was certainly a good one. I do wish the ending was a little bit longer,  because it just, well, ended. There was a huge moment between Ava and Julian and I wanted to know more what happens next. Maybe an epilogue? Or a book series? That would be epic.

This was a nice story with a great twist and a romance that seems impossible, but there is a HEA of course. I really wanted more, because it felt too short and I wanted more. I will have to check out Cynthia Eden's other works; she was good. I recommend this to those looking for a short story in this genre. It's a good one. Out of five stars, I stamp this one with 3 stars.

I have one of her books, I just need to read it ;)