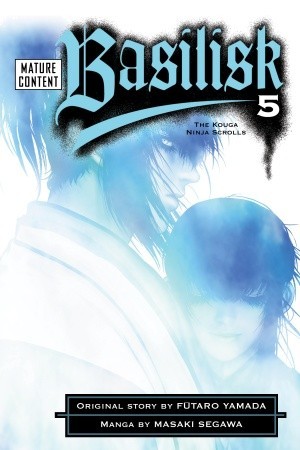 "THE FINAL SHOWDOWN
With only three ninja remaining on each side, the battle between the Iga and the Kouga clans is nearing its bloody end. Believing he has slain Yakushiji Tenzen, shape-shifter Saemon Kisaragi morphs into Tenzen’s body and infiltrates Iga territory. But what Saemon doesn’t know is that Tnezen is an immortal ninja, and that he has his own plan to dispose of Saemon and the Kouga clan. Meanwhile, Oboro, leader of the Iga clan, has sworn that she will die rather than fight against her lover, Gennosuke. Every death brings these two star-crossed lovers closer to confronting each other on the battlefield at last!"

This is finale to a great series and it still upsets me. As much as I wish that that final battle doesn't come to be and they end the fighting, it still has to come. I've read this before, but I still have hope.

Oooooooooooooooooooooh, so tragic. I cannot say what happens, but if you know any Greek/Shakespeare tragedy, then you for sure know what is going to happen. It is a tale as old as time mixed with some kick-ass ninjas and x-men type powers. The way it ends is beautifully, but sad and heart-wrenching. :(

I really wish I could say more, but I don't want to spoil anything. It's a quick read, but totally worth it. I do recommend reading the others before diving into this one. The art is lovely, but very graphic. The fight scenes are the best! There is a lot of gore, but its done in a way where it is simply art and you can't help but stare at it and admire it.

In the end, I totally recommend this to anyone who has any interest in manga or anime. It's a great story and totally worth the read! I still want to read the original book version of this story, but I haven't been able to find it yet. :/ Booo! Anyways....I stamp this with 4 stars.