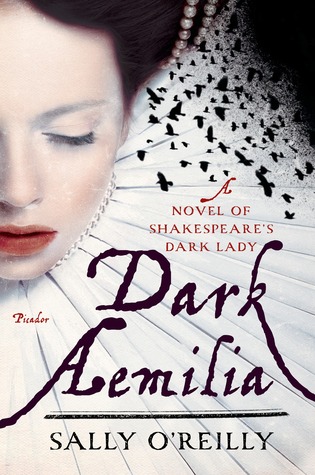 2 Chances to win! Make sure to enter here and over at Bloduedd's blog!
1. Open internationally
2. Ends September 8th
3. The winners will be completely chosen at random.
4. Just comment below with your email, so we can let you know if you won!

"A TALE OF SORCERY AND PASSION IN SEVENTEENTH-CENTURY LONDON—WHERE WITCHES HAUNT WILLIAM SHAKESPEARE AND HIS DARK LADY, THE PLAYWRIGHT'S MUSE AND ONE TRUE LOVE
The daughter of a Venetian musician, Aemilia Bassano came of age in Queen Elizabeth’s royal court. The Queen’s favorite, she develops a love of poetry and learning, maturing into a young woman known not only for her beauty but also her sharp mind and quick tongue. Aemilia becomes the mistress of Lord Hunsdon, but her position is precarious. Then she crosses paths with an impetuous playwright named William Shakespeare and begins an impassioned but ill-fated affair.A decade later, the Queen is dead, and Aemilia Bassano is now Aemilia Lanyer, fallen from favor and married to a fool. Like the rest of London, she fears the plague. And when her young son Henry takes ill, Aemilia resolves to do anything to save him, even if it means seeking help from her estranged lover, Will—or worse, making a pact with the Devil himself.In rich, vivid detail, Sally O’Reilly breathes life into England’s first female poet, a mysterious woman nearly forgotten by history. Full of passion and devilish schemes, Dark Aemilia is a tale worthy of the Bard."
Written By Carole Rae at 10:00 AM

This is awesome! Thank you SO much for this giveaway! :) ♥

Yay may i please enter

This sounds like a really intriguing book. Very cool cover too!

Thanks for the amazing giveaway :)

Thanks for this captivating novel. It sounds fascinating and intriguing. Your review was excellent. saubleb(at)gmail(dot)com

This book would be memorable and intriguing. Thanks for a very interesting giveaway. elliotbencan(at)hotmail(dot)com

Your review was so enthusiastic that there is no way I couldn't enter this giveaway!! So intrigued :O

A fabulous opportunity thank you. Loving this.

Wow it looks like a great story! Thank you for the giveaway!
bv_byby27@yahoo.com

This book sounds wonderful. I love the cover. Thanks for having this giveaway.

I would lovee to win this. Seems sooo itneresting!!