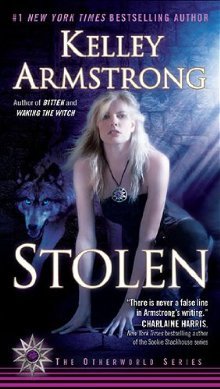 "In Book 2 of the Women of the Otherworld series, Elena Michaels is back-and she has company. Lending a mission of vampires, demons, shamans, and witches, Elena is lured into the net of ruthless Internet billionaire Tyrone Winsloe, who is well on his way to amassing a private collection of supernaturals. He plans to harness their powers for himself-even if it means killing them.
For Elena, kidnapped and imprisoned deep underground, unable to tell her friends from her enemies, choosing the right allies is a matter of life and death."

This is the second book of the series. I would highly advise reading the first one before tackling this one. I was on the fence for a while if I wanted to continue this series, but the plot of this one had me enthralled, so I went to my library and to my luck there was one left of the four they have, so I thought it fate and picked it up.

This one had more of a "diary" feel to it. Yes, it is in 1st person and so was the first novel, but this one seemed more going on Elena's feelings and opinions. It's hard to explain. It's not that I didn't like it or anything, but it was a different feel then the first one. I honestly liked Elena better in this one. Maybe it was because she was a stronger character and had to be on her own and fend for herself. Maybe it was because she was more accepting of herself of a wolf and her feelings for Clay. She was just overall stronger.

Clay....I liked him a little more, but I still don't like him much. The author did indeed calm down on his descriptions, so I was able to connect to him more. I wish that the other characters got more spotlight - ie Antonio and Nick and the new characters, but this was mainly about Elena and her being all kidnapped by psychos and stuff. I know there are books that focus on this new characters and etc, so they do get their spotlight.

It was a fun ride and I had now idea how it was all going to end. I knew Elena would get free sooner or later, but they how and why was a mystery too me. I'm glad that the author added more conflict to the story, because it added some spice and drama which made the story better. I can't really say what happens, but it was good and I'm glad the suspect of the "incidents" was not a certain character. I would've been really upset if they blamed that character.

The end was alright, but it was a little cut short and a little bit anti-climatic. Especially the quick summary in the last paragraph. Annoying, but it did leave me wanting to read the next one in the series. I am curious on learning more about characters like Paige and Adam and even Cassandra. Cassandra is a pain in butt and rude, but I kinda sorta liked her. hahaha Even though she advised the group to give up on Elena and hit on Clay. Like I said rude, but I kinda liked her. xD

In the end, this was better then the first one in many aspects. The narrative seemed more personal and diary-ish, but it worked for this one. There is a lot of times when Elena is alone with her thoughts and feelings, so I guess the author did this on purpose. The new characters were interesting and I would like to learn more about them. The ending could have used some work, but the story was entertaining and I could barely put it down. I would recommend this to those that like UF and the fantasy genre. Out of five stars I shall stamp this with 4 stars.

Why?! lol I liked it better then the first one.