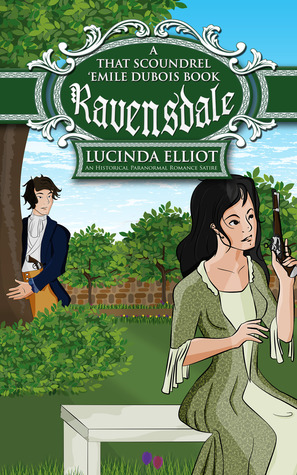 Author: Lucinda Elliot
Title: Ravensdale
Genre: Historical Romance, Comedy, and Action
Pages: ebook
First Published: April 18th, 2014
Where I Got It: My shelf (Given to me by the author/publisher for my honest and unbiased opinion)

"When the group of highwaymen headed by the disgraced Earl of Little Dean, Reynaud Ravensdale hold up the hoydenish Isabella Murray’s coach, she knocks one of them down and lectures them all on following Robin Hood’s example.
The rascally Reynaud Ravensdale – otherwise known as the dashing highwayman Mr Fox – is fascinated by her spirit.He escaped abroad three years back following his supposedly shooting a friend dead after a quarrel. Rumour has it that his far more respectable cousin was involved. Now, having come back during his father’s last illness, the young Earl is seeking to clear his name.Isabella’s ambitious parents are eager to marry her off to Reynaud Ravensdale’s cousin, the next in line to his title. The totally unromantic Isabella is even ready to elope with her outlaw admirer to escape this fate – on condition that he teaches her how to be a highwaywoman herself."

Poor Reynaud. He seems to have such crappy luck. He thinks he accidentally kills his friend, so he runs off and becomes a highwayman (what a great way to prove yourself innocent). His love marries another man, so he goes to leave the country, but then his father dies. He tries to secretly attend the service, but alas, he is discovered and they try to shoot him as he runs off. Then he stumbles upon Isabella when he tries to rob their coach. He loses his heart again and can't get her off his mind. Poor guy. Why do I pity him for falling in love again? Well, Isabella is a snot. Isabella is a selfish girl and uses Reynaud to teach her how to shoot and how to become a highwaywoman. She runs off with him and marries him JUST so she can be a highwaywoman. She is so cold to him and never says she loves him back. See? Poor guy. Granted...this IS a romance, so eventually she does realize she loves him. Takes forever, but it does happen.

Ugh. I really hate the cover...it does not match the story. It's really cheesy, but the story is totally worth looking past the cover.

I really wish that the author had skipped using flashbacks until maybe the very end. IDK, it just seemed to take away from the story. I'm rather picky about flashbacks; it has to be done right and placed right. I honestly think that the flashbacks should not have existed or the important ones should have been saved for the ending. There were a couple of moments that didn't add to the story at all.

Other then the flashbacks, I enjoyed the story. The characters were fun even though Isabella was a snot and Edmund a coward, I liked them. I didn't quite understand why some of words were capitalized...it bugged me, but the voice of the story was fun and seemed very appropriate for the time period. I really like when authors stick to the right vocabulary and etc. I especially loved the fact that the author had a dictionary for some terms that modern day people may not know, it is fantastic for people just starting the genre of Historical Fiction of the 18th century.

Ah! The ending was fantastic!! I loved it and I'm glad it did end the way that it did. :3 Edmund made me happy and I'm glad he got a HEA...not at all who I expected, but I'm happy for him. It did seem a little bit rushed, but it oddly worked for this type of story.

Overall, I liked this story. It was fun and the characters made the story. I didn't like Isabella for how she treated poor Reynaud, but she did get some of my respect when she realized how snotty she was. Edmund also earned my love when he redeemed himself as well; I'm so glad he got a HEA. The cover is cheesy as Hell, but look past it! The story is totally worth it. I wasn't a fan of the flashbacks and the random capitalizations, but I did adore the ending. I would recommend this to those that like Historical Fiction/Romance. I shall stamp this with 4 stars, it is honestly more like 3.5, but I don't decimals, so I rounded. ^.^