Length: 2 hours & 4 minutes
Released: 1998
Genre: Drama
Rating: R
Directed By: Shekhar Kapur
Where I Got It: borrowed from library

SUMMARY:
In 1554, Queen Mary I tries to restore Catholicism as England's single faith. With no heir to the crown, she maneuvers to keep her Protestant half-sister Elizabeth from succeeding her, but her efforts fail. With Mary dead, Elizabeth is proclaimed Queen of England in November 1558. Elizabeth relishes the return from exile of her childhood sweetheart, Lord Robert Dudley. Chief adviser Sir William Cecil urges the young Queen to forget personal matters and instead address the country's pressing problems. England is bankrupt, has no army, and is under serious threat from abroad. Elizabeth even has enemies within her own court, the most dangerous being the Duke of Norfolk.

REVIEW:
This is the second time I've seen this movie and I am still in awe of it. I simply not only adore Queen Elizabeth, but also Cate Blanchett. Fantastic choice and so far the best Elizabeth I've seen to date. ^.^ Honestly, the whole cast is great, so kuddos to the casting director. If I was to be queen of some country (I wish) I would want a man like Sir Francis on my side and my main man. He was so dedicated, clever, cunning, never showed weakness, and just all over perfect. I would want him on my side, because if he fell into the wrong hands it would be over for me. haha.

I also must give kuddos to the costume designers. They were lovely! Some pieces historically inaccurate, but it's hard to be perfect, because perfect may bore the unhistory-nerds out there. Yes, you want to appease people like me, but you also must dazzle those who could care a lick (thats Hollywood man). It was a nice medium and I absolutely adored the majority of costumes. 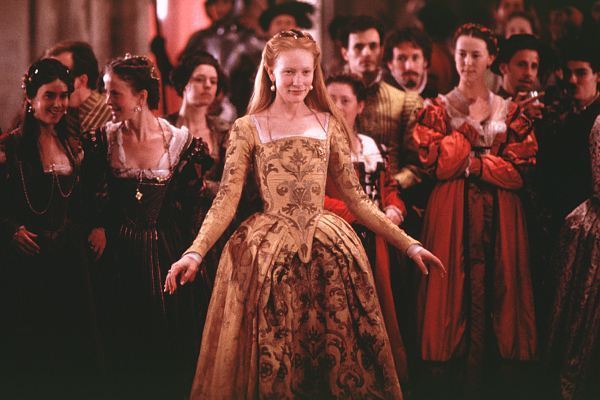 Forewarning...the beginning is a little graphic. It always gets to me. *shudders* However, it is necessary to show the audience that horrors people like Queen Mary would put on their people JUST for a simple, stupid thing like religion.Stupid humans. >__> It's been a horrible thing humanity has had to deal with for centuries and it has caused more war and death then ANY disease. Silly. As Elizabeth says,"Why must we tear ourselves apart over this small question of religion? Catholic...protestant...we all believe in God." Words hundreds of years before her time. Elizabeth was like her mother, Anne, in so many ways. They were women ahead of their time. So sad they had to be torn apart by death. Imagine what the world would be like if Elizabeth was able to be under the wing of her mother?

This was a great movie. Wonderful actors, lovely costumes, great dialogue, a great middle between historical accuracy and Hollywood add-ons, and a wonderful story-line. I would recommend this to anyone who likes history or likes good movies. In the end, I shall stamp this with 5 stars.

I wish I could wear cool clothes