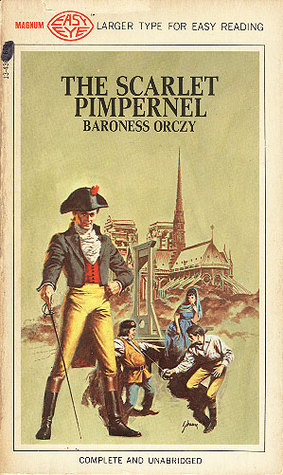 Author: Baroness Emmuska Orczy
Title: The Scarlet Pimpernel (Pimpernel #1)
Genre: Historical Fiction, Mystery, Adventure, & Classic
Pages: 382
First Published: 1905
Where I Got It: On my shelf (Mom gave it to me - use to belong to my late grandpa)

"From the Shadow of Death...
It is 1792, the French Revolution's Reign of Terror. No aristocrat shall escape; la guillotine shall have them all. Yet, miraculously, so do escape - men dressed as women, children as beggars - spirited away from the revenge-crazed mob.Who is their daring rescuer? The wily Chauvelin knows him only in his thousand disguises, who leaves as his calling card a taunting red flower..."

Ooooooooooooh I had forgotten how much I loved this book. :) Such a classic. Such a good book. Thanks to this book (and the others in the series) one of my favorite series, the Pink Carnation series, was born. Sadly, I have not read the other books in this series since I've been unable to find any in any used book store. Of course I can just buy them from Amazon (I think - I have yet to look), but I honestly like getting my classics from used book stores. Just a preference I suppose.

This is such a great book. It's filled with adventure, intrigue, drama, and humor; everything done in perfect harmony. Me gads, is Sir Percy hilarious and such a fop (even though you know it's an act). You're suppose to be blind to who is the Scarlet Pimpernel, but you know right from the beginning, because the story mainly follows his wife, Marguerite. Poor chit. He is so cold to her, because she did something wrong a long time ago and he didn't believe her side of the story. Well, she didn't push her side of the story much...so he really didn't know the specifics....me gads...so much complicity! There were both wrong in the end. IF PEOPLE JUST LEARNED TO COMMUNICATE NONE OF THIS UNNECESSARY DRAMA WOULD ENSUE! Bleurgh. However, we wouldn't have a story then, because due to his coldness he turned to saving people and keeping it a secret even from his wife.

The movie is good too, but this is SO much better. A lot more detail and story-line. There is more then at play then in the movie (which what can they really do? They have a time limit and a budget limit). The ending in the book is a lot different and more intricate and surprising then in the movie. I honestly can't tell you which ending I like best. They're both good.

Honestly, I could ramble about this book/story forever. It's just so good and I simply love Sir Percy (I also am in love with the actor who played him in the movie, so now I imagine him as Sir Percy in the book). I love Marguerite too. Well....I love the whole crew (even the baddie). Sighs. I really want to read more of the series, so I may give in and look for them online. Meh.

I read it AGES ago, I can't remember much