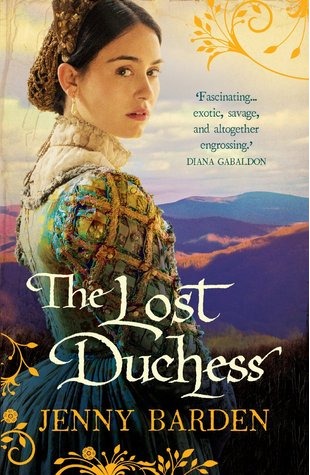 Author: Jenny Barden
Title: The Lost Duchess
Genre: Historical Fiction
Pages: 448
First Published: November 7th, 2013
Where I Got It: My shelf (Given to me by the author/publisher for my honest and unbiased opinion)

"Once a lady-in-waiting to Queen Elizabeth, her only hope of surviving the scandal that threatens to engulf her is to escape England for a fresh start in the new America where nobody has ever heard of the Duchess of Somerset.
Emme joins Kit Doonan's rag-tag band of idealists, desperados and misfits bound for Virginia. But such a voyage will be far from easy and Emme finds her attraction to the mysterious Doonan inconvenient to say the least.As for Kit, the handsome mariner has spent years imprisoned by the Spanish, and living as an outlaw with a band of escaped slaves; he has his own inner demons to confront, and his own dark secrets to keep...Ever since Sir Walter Raleigh's settlement in Virginia was abandoned in 1587 its fate has remained a mystery; 'The Lost Duchess' explores what might have happened to the ill-starred 'Lost Colony' of Roanoke."

Like earlier stated, I was given this book by the author/publisher for my honest and unbiased opinion.

First of all....I LOVE the cover. It's so pretty. :) The summary sounded good, but when I seen the cover it really was the cherry on the top. Also, I couldn't help but want to read Jenny Barden's "theory" on what happened to the Lost Colony of Roanoke. Another great mystery of history that no one will ever, ever know the truth on. Honestly...this theory is close to what I think happened. I won't discuss details, but it's a good one.

Poor Emme....luckily Queen Elizabeth allowed her to go on this adventure. She truly needed it, because she really had some bad luck happen to her. Honestly, I think Queen Elizabeth knew sort of what happened to her, because she hints at it near the end that she knows. Love Queen Elizabeth she hates idiot men and she makes them pay with their pride and will humiliate them to knock them down a peg or two.

Poor Kit....he got screwed too. He didn't have an easy life and his first wife died horribly. :( Luckily, his son lived and he met Emme. The love they find is not an easy one to obtain though, which makes sense. They are from different social standings and they have a lot of past issues they need to work out. Also, it doesn't help that they are in the middle of an adventure to a new land, so they don't have a lot of time to work on their relationship. Food, shelter, and the constant threat of death takes priority over love. I'm glad that the author made their love story a realistic one. It's not all rainbows and butterflies all the time.

The only thing I didn't really like was the ending. It was too open-ended. :/ Perhaps I'm just being picky. I just prefer having a nice lid-tight ending. One could really blame me growing up on the 'Dear America' books that had an epilogue that gave lid-tighter endings to all the main characters. IDK. However, as a writer, I LOVE leaving open-ended endings to my stories. I'm evil like that. Hehehehe. The ending in THIS story though, does end well, but it is a little cliff-hanger-y. Perhaps she did this on purpose, so if she wants to continue the story of Emme and Kit, she can. *shrugs* We shall see (I would definitely be all over a sequel for this novel).

In the end, this was really, really good. I enjoyed every moment of the book! Even the bad events kept me hooked. The ending left me hoping their is a sequel, because I was left with some open-endedness. Besides for that, I liked it a lot! I would recommend this to those that like Historical Fiction or looking for a good adventure book. Out of five stars, I shall stamp this with 5 stars. ^.^

I want to read it too ;D

Thank you for this wonderful review, Carole. I'm delighted you enjoyed the book (and that Blodeuedd wants to read it too!)

Jenny, thats so much for stopping by! It is an honor! It was truly a good book and I can't wait to see what else you have in store.