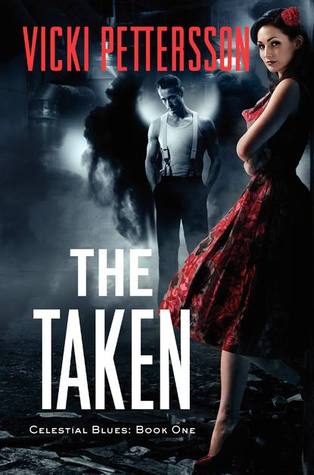 "Griffin Shaw used to be a PI, but that was back when gumshoes hoofed the streets . . . and he was still alive. Fifty years later, he's an angel, but that doesn't make him a saint. One small mistake has altered fate, and now he's been dumped back onto the mortal mudflat to collect another soul—Katherine "Kit" Craig, a journalist whose latest investigation is about to get her clipped.
Bucking heavenly orders, Grif refuses to let the sable-haired siren come to harm. Besides, protecting her offers a chance to solve the mystery of his own unsolved murder—and dole out some overdue payback for the death of his beloved wife, Evie.Joining forces, Kit and Grif's search for answers leads beyond the blinding lights of the Strip into the dark heart of an evil conspiracy. But a ruthless killer determined to destroy them isn't Grif's biggest threat. His growing attraction to Kit could cost them both their lives, along with the answer to the haunting question of his long afterlife . . ."

First off...I LOVE, LOVE the cover. The girl is pretty and her dress is gorgeous. I want it!!!!!!! Also...I want the man in the background. 0_0 *drools* Perfect model to depict Grif and all his smexyness.

Grif was simply an amazing character. Sure, he was grumpy, but he had a heart of gold. Yes, he said some rude stuff to Kit, but he was stuck on wanting to find not only his own murder, but the murder of his wife, Evie. He loved Kit, you could see that from the moment he seen her, but he felt like letting Kit in would be betraying Evie and he feared that Kit would be taken from him.

Grif is an angel and he escorts murdered souls to the Everlast (aka Heaven); he helps them move on from their murder. Well...he escorts Nic (Kit's best friend and co-worker) after her murder, but he does a big no-no. He allows her back into her human body for a few minutes JUST so she can change clothes. Silly man. She leaves a hint to Kit about who murdered her and who the baddie is. This pisses off the Pures (his bosses and higher up angels), so they banish Grif to Earth, so he can watch Kit die and then he'd escort her. However....Grif can't watch innocent Kit die, so he intervenes AGAIN when he saves her. Through this the two of them team up to find the murder of not only Nic, but he makes her help him find the murder of Evie Shaw.

I honestly wish that this whole book was in Grif's POV. I truly loved him and his story. Kit? Ugh. She got better near the end, but I wanted to punch her. She was overly positive even though her best friend is murdered and she was nearly killed. Also, she was over-the-top on being a Rockabilly. Meh. I get it! This was all she thought about throughout the whole story alongside with how sexy, but crazy Grif is. C'mon woman. I honestly can see why her ex left her. Yes, her ex was a total asshat, but she was annoying. Even Grif, the man from the era, told her she was over-the-top and that the '50s weren't all that it was cracked up to be. She settled down a little bit towards the end, but still....

Besides for the annoyance called Kit, I really was enthralled in the story. I could hardly put this down! I had to know who was the murder and head of the prostitution ring. I had it fingered out sort of, but I didn't grasp the fact on how BIG this was. There were multiple baddies that were working for and helping the main guy. If this was real life, that would be how it really was. Corruption is a poison. I loved the ending. Yes, it does leave a couple unanswered questions, but it was done in a way that you could leave this book and never read the rest in the series and be able to sleep at night. However, I really do want to read on. :) I MUST KNOW WHAT HAPPENED TO EVIE! Even though I want Grif to be with Kit, I still must know.

In the end, I did enjoy the journey. The mystery was good and the characters were written alright. Kit was annoying, but I'm glad that she simmered down a little bit. Perhaps I'll actually like her in the next book. We shall see. I would recommend this to those that like paranormal romances mixed with murder and mysteries. I especially suggest those that like Angels to give this a shot. Out of five stars, I shall stamp this with 4 stars.

Sounds cool :D I want it!