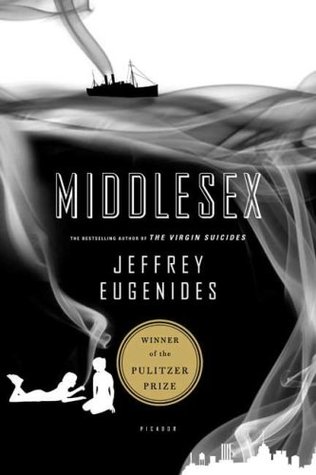 ""I was born twice: first, as a baby girl, on a remarkably smogless Detroit day of January 1960; and then again, as a teenage boy, in an emergency room near Petoskey, Michigan, in August of 1974. . . My birth certificate lists my name as Calliope Helen Stephanides. My most recent driver's license...records my first name simply as Cal."
So begins the breathtaking story of Calliope Stephanides and three generations of the Greek-American Stephanides family who travel from a tiny village overlooking Mount Olympus in Asia Minor to Prohibition-era Detroit, witnessing its glory days as the Motor City, and the race riots of 1967, before they move out to the tree-lined streets of suburban Grosse Pointe, Michigan. To understand why Calliope is not like other girls, she has to uncover a guilty family secret and the astonishing genetic history that turns Callie into Cal, one of the most audacious and wondrous narrators in contemporary fiction. Lyrical and thrilling, Middlesex is an exhilarating reinvention of the American epic."

Yet another book I would never have picked up if it hadn't been for the book club my friends and I recently created. Reece had picked this book.

For this review, I'm going to divide the book into 4 parts (each one talking about the different parts).

Part 1:
Oh, the beginning.
It was slow and hard to get through at times. Why was it slow? Not because nothing happened or that it was all set-up, but because of how it was written. Too much detail and too much jumping around present time (Cal's present) and then his grandparent's love story and then his parents love story. I had to re-read sections to get who was who and what was going on. It was very sporadic. It gave me a headache. I was worried that this was going to be how the whole book was. Not my favorite part at all. Part 2:
OH MY GOSH! Sooooooooooo much better. I was actually able to enjoy myself. It followed Desdemona and Lefty and their love story. They are Cal/Callie's grandparents. HOWEVER, they are brother and sister. 0.0 Yes, there is some nice family incest going on in this book. I'm super glad it took a long time for them to actually GET together and be slightly okay with it. Dessie had issues and regrets all her life. Good. It's not at ALL okay to marry your brother. Nope. That is main reason that Cal/Callie came out the way she did. Too much family-loving in that village. The village was small, so it wasn't uncommon to marry a cousin. According to Dessie's madre, it wasn't uncommon for odd things to happen to babies every so often. RED FLAG! DON'T REPRODUCE WITH YOUR BROTHER!!!!!!!!!! Good lord. Off my rant about incest....

There was still some jumping around in time, but it happened less and it was more announced. It mainly would flash to Cal's present at the beginning of the chapter. I enjoyed this part of the book much better. It was a nice flow. From Dessie and Lefty coming to America, to them having kids, to seeing the love romance blossom of their son to his second cousin (yet more family loving going on), Tessie, and then the birth and growing up of their kids. Finally...the spotlight would arrive on Callie.

Part 3:
Poor Callie/Cal. I can't imagine that life. It all was normal and she didn't really feel different until puberty came along. She wasn't getting all the girly stuff she was suppose to. All that happened was that she got super tall and her voice dropped an octave. The only girly thing on her was her long, black hair.

I wish that her first love would have last. I wanted more of WHY they never seen each other again. Why they didn't try to make it work. Sighs. She sort of flew by that and gave no explanation. Oh well...

I enjoyed the story more and more with each page. In a way, I did like Callie's story better then that of the last two generations. Can't explain why...perhaps it was because she was a completely different character for me? I never, ever read a story narrated and spotlighting on a hermaphrodite. A whole new world for me.

Part 4/Conclusion:
Wow...just wow....I lost a lot of respect for Cal/Callie. Many will disagree with me, but it made me mad what she did. I can't say it without giving away a lot of spoilers. Her parents gave her nothing but love and trying to help her. Her parents would have understood. In the end, she did come to senses (forcibly) and realize that her parents love her and accept her. It's not the parents or the doctors fault for thinking she identified with being a girl. Callie lied to the doctor with all the questions he asked. He gave her a million chances to say that she felt more boy then girl and that she liked girls. C'mon...what did you except? I know, I know, she was scared, but still...>__> Daft.

The ending was okay...it was a little anti-climatic. It seemed forced and quick. After such a long tale, a one page conclusion WILL NOT WORK! Please, give the ending some thought.

There's so much more I want to go on about, but I can't...too many spoilers would be unleashed.

I must give a sigh of relief, however, because I was worried this book would be sporadic and jumping through time like in Part 1. Thank you Mr. Eugenides. Thank you. (One more, I'm sorry)

In the end, I did enjoy this book. Every page was better and better. The author seemed to cool his jets as he went along. There is no reason to over-write and try to establish EVERY character in the first part. Introduce them along with the journey. Once the ball got moving, I enjoyed the journey. I liked Cal and his/her story, but at one point I did lose some respect. However, she/he gained a lot back at the end. I wish that the ending was a little longer and not so anti-climatic, but it worked.

Favorite Character(s): Cal/Callie (lost some respect, but it was returned), Lefty (he reminded me of my grandpa, except for the marrying and sleeping with his sister....), Tessie, and Zora (wish she had more stage time)

Not- so Favorite Character(s): Milton (meh), Chapter Eleven (creep and a stupid name I don't understand), Jerome (another creep), and Father Michael (something was wrong with him...)

Yeah...it was a strange one.

I'm glad I picked a book you would not have otherwise chosen and that overall you enjoyed it! I felt very similarly to you about it.

Part 1 was very slow. I agree that if he had spaced out the character introduction it would have gone a lot smoother, but he made up for it by the end!

I loved the parts after they got to America. Reading about the rising life in Detroit and it's decline was awesome! I loved that while you were reading Cal's story you were also reading a story about Detroit and America and love in general!

I think the implication about her first love is that Cal couldn't face her with the new information. She would always be the one that got away. Plus, Cal does state that he liked to not stay in one place, made things easier, so obviously he wasn't going to settle down with his first love.

As far as her lying and running away, you have to put it into context. Back then being gay was a huge no-no and I don't think Callie fully understood that what she said or didn't say would forever change how things were. And I think a part of he didn't want to burden her family any more and that's why she ran away to a place that she felt would be more accepting of who she was.

I do also wish the ending did a little more, but I think the point was her story wasn't over (she wasn't dead) so leaving it open ended made sense and let you kind of finish the story in your own mind.

BTW - I don't know for sure but Chapter Eleven's name, remember how the author said he ended up filing bankruptcy on Hercules Hotdogs? Well when a business files bankruptcy, it's a Chapter 11 bankruptcy, so maybe that was the explanation for that.

Thanks for picking this Reece. This was worth it! Can't wait to talk about this at the meeting. I get that gay is a no-no, but they were supportive and tried to help her/him. Bahahaha perhaps that was a fake name (like Object).