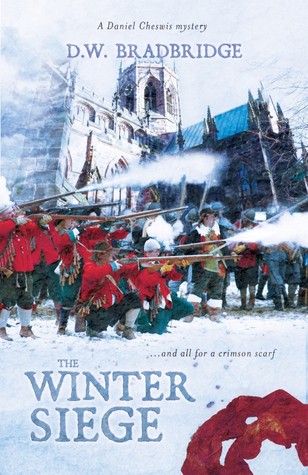 Author: DW Bradbridge
Title: The Winter Siege
Genre: Historical Fiction & Mystery
Pages: 488
First Published: September 2013
Where I Got It: Given to me by the author/publisher for my honest and unbiased opinion

"1643. The armies of King Charles I and Parliament clash in the streets and fields of England, threatening to tear the country apart, as winter closes in around the parliamentary stronghold of Nantwich. The royalists have pillaged the town before, and now, they are returning. But even with weeks to prepare before the Civil War is once more at its gates, that doesn’t mean the people of Nantwich are safe.
While the garrison of soldiers commanded by Colonel George Booth stand guard, the town’s residents wait, eyeing the outside world with unease, unaware that they face a deadly threat from within. Townspeople are being murdered – the red sashes of the royalists left on the bodies marking them as traitors to the parliamentary cause.When the first dead man is found, his skull caved in with a rock, fingers start being pointed, and old hatreds rise to the surface. It falls to Constable Daniel Cheswis to contain the bloodshed, deputising his friend, Alexander Clowes, to help him in his investigations, carried out with the eyes of both armies on his back. And they are not the only ones watching him.He is surrounded by enemies, and between preparing for the imminent battle, watching over his family, being reunited with his long-lost sweetheart, and trying, somehow, to stay in business, he barely has time to solve a murder.With few clues and the constant distraction of war, can Cheswis protect the people of Nantwich? And which among them need protecting? Whether they are old friends or troubled family, in these treacherous times, everyone’s a traitor, in war, law, or love.When the Winter Siege is through, who will be among the bodies?"

Like earlier stated I was given this book from the author/publisher for my honest and unbiased opinion.

This was the first book I've read that was set in the middle of the English revolution during the 1640s. My knowledge on this Civil War is limited. Only small bits and pieces of information here and there. This was book gave me a nice taste of the war. Chaotic time indeed.

I really appreciate that the author did a different POV. Normally the POVs are in soldiers or dukes or someone of pretend or real historic importance. The main POV of this book is a man named Daniel who is a constable, but he also sells cheese and salt. It was interesting and I liked it. Well, it was interesting when the author went over some historical facts about everyday life and the businesses of the day. It was nice and all that...but it slowed down the book at some points.

The mystery mixed in was a nice twist too. At first, I was unsure about how it was going to all mix together. I was worried it was going to be cheesy and seem out of place. This worked nicely and it flowed nicely with the historical fiction and war aspect of the novel. Nicely done. Kuddos to the author on that! It's not an easy feat mixing genres, but this was done well. I do have mixed feelings on HOW it ended. Gah...I don't know how to explain it without giving away major spoilers....but I was glad it ended with a sorta a HEA, but I didn't like how Daniel got the answers to the mystery. That's as much as I can say about that...

All-in-all, this was an okay book. I liked it. It was a nice look at a war I have limited knowledge about. Not only did I learn some interesting facts about the war, but about everyday life in 1640s as well. Some points seemed slow, but the characters were interesting and the mystery was certainly a mystery. I wish the how on the ending was a little different, but I'm glad it ended the way it did. I recommend this to those that like historical fiction. I shall stamp this with 3 stars.