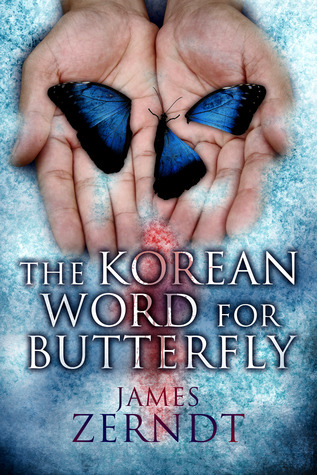 Author: James Zerndt
Title: The Korean Word for Butterfly
Genre: Fiction, Contemporary
Pages: ebook
First Published: March 27th, 2013
Where I Got It: Given to me by the author/publisher for my honest and unbiased opinion

"Set against the backdrop of the 2002 World Cup and rising anti-American sentiment due to a deadly accident involving two young Korean girls and a U.S. tank, The Korean Word For Butterfly is told from three alternating points-of-view:
Billie, the young wanna-be poet looking for adventure with her boyfriend who soon finds herself questioning her decision to travel so far from the comforts of American life;Moon, the ex K-pop band manager who now works at the English school struggling to maintain his sobriety in hopes of getting his family back;And Yun-ji , a secretary at the school whose new feelings of resentment toward Americans may lead her to do something she never would have imagined possible. The Korean Word For Butterfly is a story about the choices we make and why we make them. It is a story, ultimately, about the power of love and redemption."

Like earlier stated I was given this book by the author/publisher for my honest and unbiased opinion.

I've been DYING to read this book since I first hear of it. I read a few reviews a while back and I was tempted to buy it, but I waited for it to go down in price (I'm frugal...I can't help it). When the price went down, I was about to buy it, but I luckily got asked to review this...so yayy!

This was definitely a good book. I was so absorbed, I could hardly put it down. Of course I'm reading this during moving out and etc, so my free-time was scarce. Sighs. Such is life. When I did have the time, I was reading this.

The characters were all different with different stories, but they were all connected in some way. I hated Billie, but I did like her story. I liked all the stories, but I wanted to punch Billie in the face. Poor Joe...I know he wasn't as supportive at one point (can't say what), because he was stuck in his own head and grief. It isn't right, but everyone mourns/deals with life issues differently. Billie wasn't AT all supportive of him or even remotely understanding. It was an issue that both had to deal with and make peace with. She was so damn selfish and self-absorbed she didn't care how others felt. Near the end she got better, but still...meh.

It was nice to get different POVs (which are nicely stated when the POV switches). It was nice to see how Koreans see Americans and the American soldiers. Honestly...I didn't know that many hate that Americans are there. When my cousin was stationed there last year, he said the the majority liked the fact the Americans are there. Perhaps it was different years ago (this was set in the early 2000s, so it might have been different). I loved learning more about the Korean culture. It was nice and interesting.

I really liked this book. I'm mad at myself for waiting SO long to actually get my hands on it and read it. I recommend people who like people books to read this. It was a nice change up in my reading. I rarely read anything set in Korea, especially more modern books. The characters and the story were great and well written. Out of five stars I shall stamp this with 5 stars. ^.^

Thanks for taking part in the tour. I'm glad you loved The Korean Word For Butterfly as much as I did!

Teddy, thanks for including me on the tour!!

I came to browse some of your 5 star reviews and this one definitely caught my attention. I love the cover!!

The cover is what caught my eye too. Thanks for coming over here!